Parts are cheap but our beloved Posti (Post of Finland) will no doubt charge an arm & leg for shipping.

I will begin releasing dimensions, 3D files and other details on Pokitto. These hats will come with full schematics & files for printing, if you prefer to DIY the whole thing.

A potential solution could be to bundle it with a pokitto, other hats, components, etc…

Looking forward for this hat! Is SMD soldering hard to do by hand by the way? Never did it but it seemed to require tools and a good dexterity

No SMD (surface mount components) in this hat, its all throughhole. And ofcourse I will solder (or Aaro) if people insist on ready-made.

SMD soldering of simple components (resistors, capacitors, simple chips) is easy. SMD soldering of Pokitto LCD connector by hand is very, very hard because you get solder bridges if you hsve just a tiny bit too much solder.

Someone please suggest a good name for this hat. The XtraJoy is dumb.

Pocket chip!
I miss being able to use mine.

Reminds me of @trelemar’s idea:

Just a stupid idea I thought of. Rotate the Pokitto 90 degrees, put this hat on and get more buttons for input. [image]

I find it a bit odd that there’s a hole on the top left of the hat but on the top right.
And I think there should be two lots of those grey bars holding the hat in place.
(I like symmetry, is it obvious? :P)

Also maybe they should be on the back rather than the front (though obviously people can choose which side to put them on).

What are the buttons on the sides of the hat for?

Reminds me of @trelemar’s idea:

I think that’s where the idea came from. What made me move is that I now got some thumb joysticks from ebay.

Legos can be used on both sides. They’re legos afterall. Like I said previously, the friction of the big pin connector alone can hold the hat in place

I think that’s where the idea came from. What made me move is that I now got some thumb joysticks from ebay.

I think @trelemar’s original design was thinking of sliders rather than joysticks, but maybe I’m mis-remembering.

Legos can be used on both sides. They’re legos afterall.

Fun fact: in Britain we consider ‘lego’ to be uncountable (both singular and plural, like ‘code’), and ‘legos’ to be an Americanism. :P

Won’t those cables get in the way if a game is designed to be 90°?

The are such cool possibilities

For naming, I’m leaning towards:

Version 3 with rumble motor added to top left corner. Its a Jinlong 3V motor, pretty powerful, through-hole with excellent characteristics, but its 2.44 USD a piece!

@Pharap : as per your suggestion I modified the hat to have 4 holes symmetrically. It makes PCB layout much easier, leaves more space for components and generally works just better 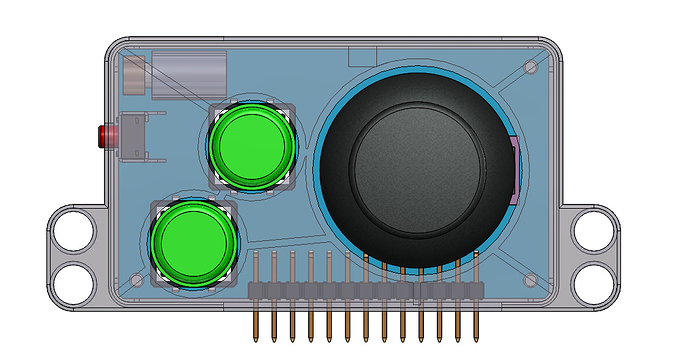 why are you going for the large analog stick? wouldent a low profile one make more sence?
(psp, 3ds) 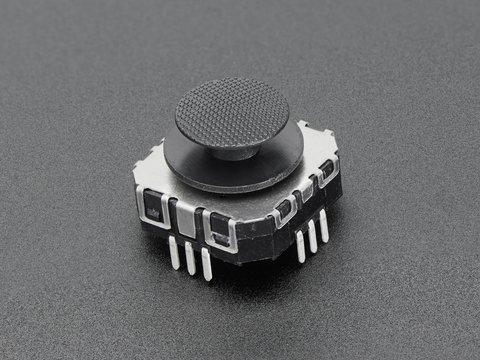 Sometimes a simple analog control device can be the perfect tactile solution for your project, but they can be surprisingly hard to come by. Luckily we've got a low cost, quality Mini ...

Thats a very good question. I wonder if I can find that component somewhere else

Sometimes a simple analog control device can be the perfect tactile solution for your project, but they can be surprisingly hard to come by.

It indeed seems so.

Version 3 with rumble motor added to top left corner. Its a Jinlong 3V motor, pretty powerful, through-hole with excellent characteristics, but its 2.44 USD a piece!

I think it would be best to test that before finalising it.
I have two main concerns with a motor:

(These issues are why I suggest that a ‘rumble’ feature should be implemented as ‘boots’ rather than a ‘hat’.)

I modified the hat to have 4 holes symmetrically

Presumably the reason for the 4th hole being absent in the original design was because it would interfere with the PCB?

Wouldn’t having 4 holes like this require altering the mold?
I know you can fill unused space within a mold, but I’m not sure how you’d manage to double-up holes like this.
Though I agree not having the holes on the main body and just putting them on the ‘arms’ (or should that be ‘brim’ of the ‘hat’? :P) probably makes fitting the PCB in easier.

why are you going for the large analog stick? wouldent a low profile one make more sence?

I agree with this, in the current designs the joystick does look a bit on the large side.

My biggest concern with a large joystick would be how much pressure is being put on the pins.
I don’t know how much the pins have been stress tested,
but I know bent pins can be a real problem.

One thing I’ve thought of in the past is to put ‘sideburns’ on the hat to spread the load a bit. 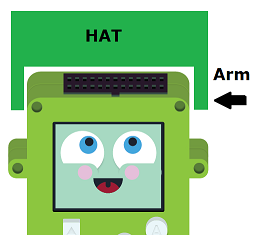 (Though I imagined them being shaped to fit around the Pokitto more. I’ll try to draw something by hand later to give a better idea of what I mean.)

Though the downside to this is that I don’t know how it could be pulled off without altering the mold.
It probably can be done somehow, but hardware manufacturing isn’t my forte.

Don’t forget the SD card slot, it’s already hard to extract,
The L bracket on the other side should be fine

That translucent case led (pun intended) me to think about a RGB-led. Would it be hard to add?

Normal one or a powerful one?