just want you to be informed that I am making a full game called “Mars Attack!”. It is inspired by New York Blitz for Vic-20. The game is made in Python and it uses Pokitto hires 4-color graphics mode. Most likely I will be using some kind of particle effects too. Below is a screenshot of the current state of the game. 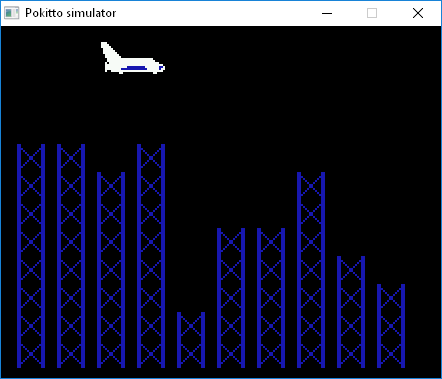 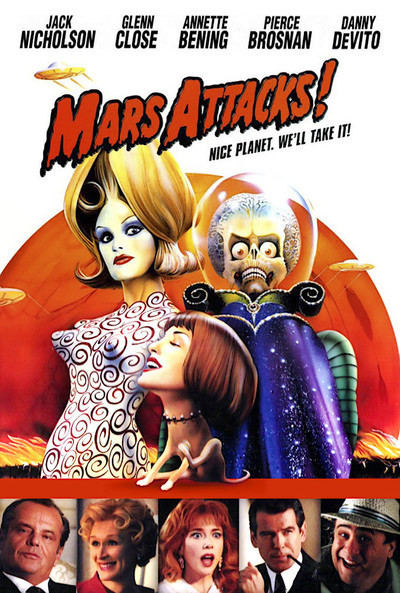 This is a bit different story. This time humans are attacking Mars which is inhabited by robots! Here is your space opera

Over the centuries, humans have send thousands of autonomous robots to Mars. Their mission was to prepare the planet for the human colonization. However, the reports the robots sent to Earth were always discouraging. Despite of numerous efforts, Mars seemed to be a too hostile planed for humans…

But that was all a big lie!

During the centuries in Mars, the robots had developed an artificial intelligence. Their plan is to build military forces in secrecy, and take the planet to themselves. Then they would turn against their creators and attack to Earth! By a lucky accident, humans got to know their plans before it was too late.

Now, your mission is to bomber down all the gun towers the robots have build on the surface of Mars. Unfortunately, due the long trip from Earth to the Mars orbit, you do not have enough fuel for your armed space shuttle, and you are constantly losing height! The destiny of humankind is on your shoulders…

Does anybody of you want to attend by making the game graphics (or sounds)?

This game is gonna be Open Source and free as free beer, but you get the credits. As mentioned before, the screen mode is Hires: 220x176, 4-colors. As in Pokitto the palette is not fixed, we can do nice fade-in/out effects by animating palette indices. Also, as the game progresses to the next level, the palette could be different.

There is not much graphics to be done right now:

The graphics style could be anything. I was thinking e.g. something isometric-like to give a sense of depth, but I am open to suggestions. I am planning to make the explosions with particles, so explosion animation frames are not needed.

I got the graphics contributed for the game.Thanks JP!

Looks great! Those alien structures looks so 60’s, it reminds me of some old sci-fi films.

Yes, graphics are very atmospheric and have a nice retro feeling!

Btw: Did you spot droids hiding there?

Btw: Did you spot droids hiding there?

No, but after you said I zoom in and got a nice surprise. Nice touch.
So the question is: who is JP? Can we recruit him/her for more assets?

JP has no account in this forum. I can ask him about the asset creation for games.

So what type of file for sound pcm,wav,raw? 8bit/16bit? 22khz? What type of soundfx do you need (list) laser, explosion, out of fuel, bonus…
Can you play mod module from Amiga?
I have some experience on gba.Tiny mods… 4kb or so…

I’m actually interested as well. There is the synth with 4 channels, so we can’t really play any kind of sound-based files.

I was thinking about making my own music format for the pokitto, some kind of very simplified midi file? And when a sound is emitted, it overrides temporarily some channels (but one is kept for the “main” instrument of the current music) until it finishes playing. That’s my take on it

the storage memory (total ROM is 256kb) is quite limited, even more limited with MicroPython interpreter and Python libs on ROM. It is possible to stream from SD card, but as not everyone has it, I would at first try to use ROM for storing the music.

In the title screen, the performance is not critical as there are no animations at the same time. Maybe RBoy Tracker format would be a good choice for the title music(?). The music itself can be anything you like, simple melody, ambient, etc.

For the actual game play, it would be safest bet not to have background music at first, just simple effects.That is so that we do not to kill cpu and have too low fps. There is a ChipEngine API which have following features:

Introduction to Pokitto's sound abilities Pokitto can make sound in various ways: music streaming from the SD card as a continuous stream beeps and boops (squarewave sounds) like the Arduboy and Gamebuino synthesizer more complex sounds like saw waves & triangle waves, ADSR envelopes etc Pokitto has 2 hardware output channels that are mixed together: * 8-bit DAC channel * 8-bit PWM channel Because Pokitto has 2 hardware channels, it is possible to for example, stream music from SD ca…

I hope it is not too CPU intensive, so we can use it for effects.

Here is are some original Blitz gameplay videos:

RBoy tracker looks easy.So first I will do title melody and after that some fx…

The only thing really missing from Pokitto sound sources is the Rboy song playback.

The reason for this is I originally made the portable tracker ion the AtMega328 and ran out of memory. So I never got around to moving the playback code from PC to the Hardware itself.

FYI I am working on it. I will try to put the code up so that you too can take a look at it

I finally figured out how to implement rom bitmaps in MicroPython! The size of free ram is no more limiting the graphics in a Python game. 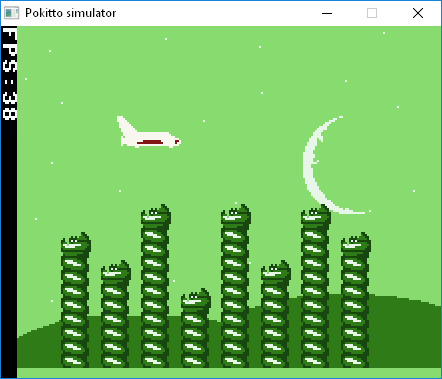