This is a demake of Button City. Typically described as a “narrative adventure,” you can think of the gameplay as a point-and-click with more dialogue and no moon logic. Occasionally, there are small mini games. 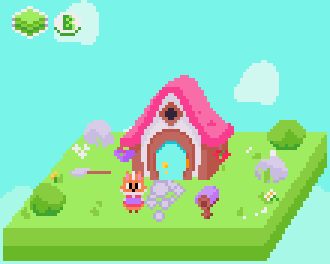 Play as a little fox named Fennel. Explore the town and earn some buttons at the lemonade stand:

After that, take your buttons to Button City (the local arcade) to play some rounds of either Mechamelon’s Quest (side scroller) or Prisma Bops (rhythm game):

I’m not sure if a narrative game is quite up this community’s alley, but it was fun to make. I didn’t quite get the polish I was aiming for, so I’ll probably do a number of post jam touch ups regardless (including a POP file).

Note on story: this is heavily based on characters and concepts in the actual game. I’ll post a “Glossary” before too long to clarify. Sorry if it’s too overwhelming to follow the story

Note on controls: use the C button to see all interactable objects on a screen. I missed getting a prompt in there in time.

Note on sounds: the music is a touch… screechy. Sorry about that. You’ll want to keep the volume under 3.

Just a heads up: this is an oversized bin, you can’t load it through the loader.

Oopsie, didn’t realize that was a thing. How much do I need to bring it down by?

I think the maximum was 220kb.

Thanks for the heads-up on this. I was able to get the file size down and tested it with the loader. I fixed some issues that I considered critical, but otherwise, I think it’s a reasonably faithful version of what I got up for the jam.

That said, this might be a game you will only play once. If anyone thinks that they fall into that category, maybe consider waiting a few weeks. I’m not super happy with the version that’s here, and I’d rather people get a slightly more complete experience.

This game is so pro quality! I like the lowres gfx too

This game is really awesome. Can’t wait for save game so I can progress further.

I had to stop though because the game froze after completing the 3 tasks and talking to Licorice again. I got the item from Licorice and then the screen froze and no button would do anything.

Oh! Thanks for the heads-up on that. I hadn’t seen that happen yet. For reference, did you flash the jam version, or use 1.1?

So you don’t need to bother coming back to it. Unless you played the jam version, I guess - I left a debug flag on and it starts just a couple of story scenes ahead (oops). But you still wouldn’t have missed much.

I played the v1.1 version from itch.io.

Yay, I guess, will have to play it again when it’s fixed.

So you don’t need to bother coming back to it.

But it’s so much fun so of course I’m going to come back to it again. Too bad the original is only on the PS5 and not the PS4 cause I would totally get it. It’s a really fun, cute, and simple game.

This game quality it’s really on step above.
From the great gfx to the finest details everything looks like a AAA product.
Really a nice surprise from quite an unexpected participant

Please more of the same!

I think i would love to work on translating this in French so my daughter can enjoy it too!

But honestly, I’d be more than happy to integrate that; if you’re serious about it, shoot me a message. There would be just a couple of details to figure out.

This game is really amazing. The production values, variety, and polish are all really incredible for a jam game, and I don’t know how you managed to get all this crammed on the Pokitto so quickly.

Even though I was messing up in the minigames a lot, it was relatively easy to pass them. That was nice for just relaxing and taking in the game’s atmosphere, but I did feel like I was moving very quickly through the game. I feel like with infinite retries, the minigames could be a tiny bit harder. I did end up having to stop because of a game freeze (details in spoiler), but I was having a great time playing it. I never played the original game, but it was refreshing to be dropped into a world of all these characters with no context. There was no big info dump, just a bunch of characters interacting, and you have to figure out who is who as you go. I may have to take a look at the original game, because this was really enjoyable.

There were several lines of dialogue that didn’t fit in the dialogue bubbles, but besides that the game felt really polished.

But it’s so much fun so of course I’m going to come back to it again. Too bad the original is only on the PS5 and not the PS4 cause I would totally get it. It’s a really fun, cute, and simple game.

It’s on steam as well!

@jonne thanks for that! I was unclear whether that would be in the spirit of the jam, since I did some small UX bugfixes alongside, and also made the POP art outside of the jam timeline. But I’m glad that it won’t surprise people with a broken loader now.

@wuuff thanks so much for the comments! “cozy” is definitely within the spirit of the game, so I’m glad that you enjoyed taking it in

And yeah, that crash at the end will happen for everyone; it’s now fixed on my end (I had written a 1 instead of a 0!)

@HomineLudens Wow! Awesome! I’d love to figure out pushing all of the game dialogue into a LibHotswap so that I can have one bin with runtime language switching, so… I’ll reach out to you soon once I get things reorganized

@lucentbeam this was truly next level stuff on Pokitto. Well done.

Okay, I’ve updated the first post with a build for version 1.2. I think this’ll be the final version. Here are the changes:

Unfortunately, I couldn’t sort out why my audio tracks have so much noise during the silent periods (and in general), and I don’t really have the time or patience, currently, to continue mucking with it.

So I used Audacity’s “Truncate Silence” function to flatten out the files after they were converted to 8-bit. Is that not good enough? What do you mean “by hand”?