[DevLog][WIP] A Ride In a Tank (Tentative Name)

ARIT is a game where you’re someone who is trying to survive in a dystopian world. It’s quite a bleak world to live in.
But fortunately, you’re not alone!

Along with your partner, you’re driving a quite sturdy tank around in a dense, superficially clean City dominated by a quite egoistical and brutal government. And maybe a bit outside as well!

Sorry, no screenshots yet 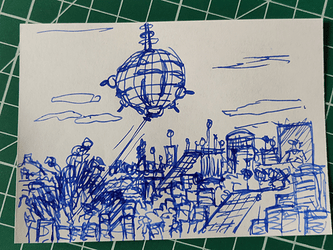 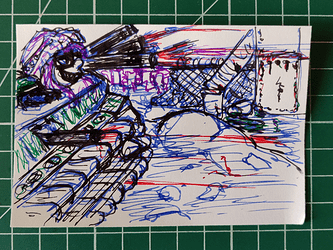 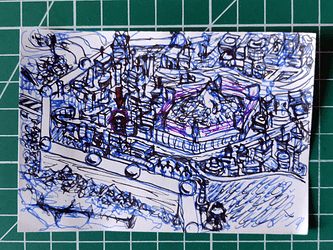 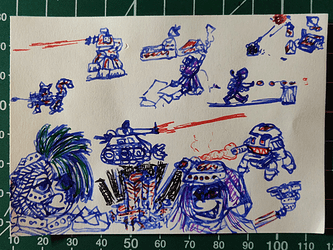 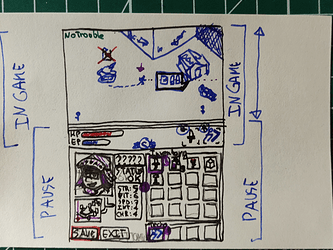 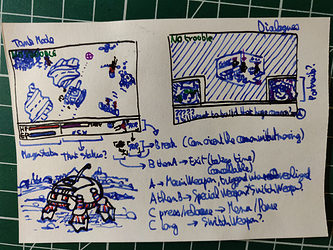 You did a really good job with the sketches, looks promising!

I finally got myself some time to start this project properly.

Weeeeeeeee. Makes me want to do an RTS, too. Maybe I will import it to Tiny War Simulator after the jam! 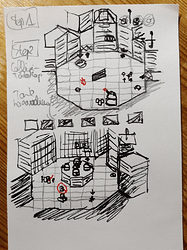 Going backward in the tank is slower, too. 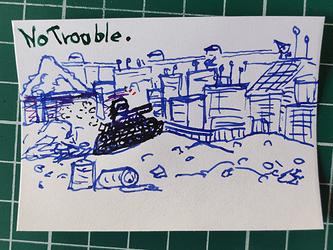 The Title Screen, with a 1-choice menu, along with the new Barrels. The tank appears really tiny here, and will need to be redone later.

About that StateMachine, I added an init method to the states (since some things can’t be done in the constructor) and a report method so that I could keep an eye on each state individually during development. I just call stateMachine.report() right after begin.

I figured you might find it useful as well.

Definitely going to use it at some point!

Solely focused on the UI this time, in particular the Pause UI. 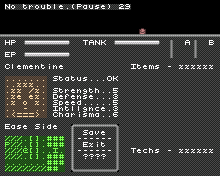 Bigger, bigger! This barrel won’t dwarf it too much anymore. Note that proportion aren’t made to be realist in this game.

Making the new Tank into the game, and implementing the Cannon Fire.

Can’t wait to explode those barrels!

Firing some… huu ball of scraps I guess. The fun factor was increased by 100%

Testing Projectile/Barrel collisions. The collisions are resolved in 3D using a simple model of Cylinders.

That barrel explosion is really nicely drawn … it is quite hypnotic when you watch it!

A bit of barrel works and a lot of internal works in the engine:

Centering on the tank, even when pausing/unpausing.

From intact to destroyed barrel.

Tried to use a formal fixed point class but it ended up being much more annoying to do than simply use regular ints with the proper divisions.

Which one did you try to use?

If it’s my one then I’m happy to answer any questions or listen to any complaints.
(If it’s that C-ish “what’s operator overloading?” one that’s in the PokittoLibs folder then I’m not surprised you found it annoying.)

Unfortunately I’m so late into my project I’d rather be sticking to the current code which is based on int. I’ve been working with fixed points since almost two decades, I know the vast majority of the pitfalls, and so far I never was satisfied with any lib I tried. There is always some compromise at some point, or then it’s extremely verbose.

I tried again but it’s just not as smooth as plain integer. I won’t develop more on it, because trying to explain why is going to cost me more painful time as well. I don’t want to spend more energy on this, especially since I can do it the “old way” efficiently enough.

However I thank you for your proposition. I’ll be sure to have a look at your lib after the jam. Some parts of me is still annoyed to have those 8/16/256 prefix after variables name to reminds me they’re the x8/x16/x256 version of the actual value, after all.

There is always some compromise at some point

I see what you did there.

I have also reverted to plain int for my entry. If you know that multiplying two 32-bit values won’t overflow, you really don’t want to use a 64-bit int, it’s much slower.

There is always some compromise at some point, or then it’s extremely verbose.

Unfortunately that’s the nature of programming.
Programs are rife with compromises and heuristics,
and programmers are the ones who have to make the decisions.

In the case of anything mathematical, there’s so many different ways to do things that after a while you have to provide specific named operations.
That’s as true for floating points as it is fixed points.
(IEEE 754 defines at least 5 different rounding modes.)

Some parts of me is still annoyed to have those 8/16/256 prefix after variables name to reminds me they’re the x8/x16/x256 version of the actual value, after all.

That’s where a strong type system comes in.
Information like that should be part of the type.

I once saw a presentation* that demonstrated how encoding units as actual datatypes instead of using raw floating points could signal logic errors at compile time.
E.g.

This sort of thing inspired my library, hence I allow code like:

(You can look at all this stuff after the jam or whenever,
I’m just mentioning it in case you or anyone else finds it interesting.)

If you know that multiplying two 32-bit values won’t overflow, you really don’t want to use a 64-bit int, it’s much slower.

This is one of those ‘nature of the beast’ issues.
Some people will inevitably want precision over speed,
whilst others will want speed over precision.

I do actually know of one way to solve this in such a way that operator * could do both,
but it’s a fair bit of effort, so introducing a named function is usually the easier option.
(Spoiler: it involves more template parameters.)

I’ve seen the same presentation. It’s attractive, and I like the fact that the chrono part of the STL kind of follows that paradigm.

However, let’s talk about these fixed after the jam, ok? I’ve got more critical stuff to do before and I’ve already decided that I wouldn’t use a fixed class right now

As I said, I was just leaving that info around so you can come back to it later,
(and in case anyone else was interested,)
I was not trying to get you to change what you are doing right this minute.