ARIAT-HW is a spinoff of the main project I started for the Punk Jam and still haven’t released yet -thought secretly working on it.

Ultimately it’ll be a collection of various tiny games taking place in the same universe, and made with the amazing Pine-2K by @FManga.

I took interest into it because it’s great to prototype core gameplays.

This post also serves as a repository for various techniques I’m using.

The intended game - it’s a prototype of the Highway gameplay from the main game.
It’ll be a sidescrolling road with a moving background and obstacles.

An arena where you’re in a tank and followed by a hoard of other tanks.

Sorry for that music

Since 2K of code isn’t really much, I rely on the following techniques to help saving a bit of bytes.

Variables are great for 1-dimensional values, but I like to get 2 or 3-dimensional myself. Using more variables is just going to increase a lot the code, so how about packing them nicely into array instead?

A collection of simple objects.

This allows me to have a dynamic number of objects. If you got only 2 objects, like the player and an enemy it’s probably not worth it.

An interesting technique which can help you pack a bit more code.

All of these combined mean you can use a script to export simple functions and load them from another script!

However, those functions come with a lot of limitations:

You can circumvent the call limitation by passing a function to be called (as a callback) or an array of functions.

I found the following uses for those:

Also, there is a little trick due to Thumb-2 to make it work on the actual Pokitto (emulator is unaffected) (Thanks @FManga for the pointers!):

Great write up of the techniques you are using - will definitely help others!

Small update about the rumble!

I’ve been tilemaps and making them scrollable.
The tilemap itself is just a png, it’s using 2 16x16 tiles too.
I also played with window a bit to circumvent a limitation of tileshift (which clamp to 0-7, insufficient for 16x16 tiles).

I’ve been craving chocolate recently, don’t mind the colors. Also, I forgot to rename the text - it’s not tileshift but updateTilemap16.

I’ve also been trying to integrate it into the rumble minigame, but unfortunately I think I ran out of global variables, so I need to pack things tighter before anything else.

Additionally I made a camera offset so it could be used with this tilemap, but it’s hard to demonstrate right now.

More tilemap fun and corruption too

The rumble with minimap showing when B is pressed and everything is happening normally.

The other rumble with the corrupted map. 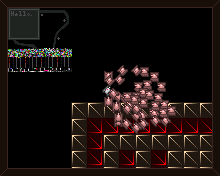 The minimap also gets corrupted. The large band of noise seems to be the music’s buffer (512 is 12.5% of 64x64 bytes, and it gets updated less often than the rest of the game or corruption). 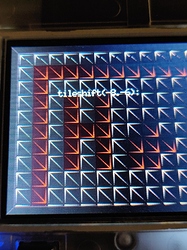 Gameplay-wise, it feels fit for the racing-like gameplay of the Highways sections that’ll be later included in ARIAT. The tilemap helps a lot getting a notion of movement since the camera is now following the player.

The controls feel nice as well, I’m growing fond of it.

Sprites manipulation, linefillers and an exploration of the “road renderer”

Using a sprite as a frame-buffer - and a x+y+random() as the color. Miloslave is great for these. First one is 8bpp, low-res. Second one is 1b, hires. Third one is 4b, hires.

A “low-res” used with a simple road renderer. It’s a bit blocky.

Final result - linefiller-based road renderer, and scaled sprites. Don’t ask about why trees pierced the road. It’s smoother on the actual device too.

It feels satisfying. A challenge in integrating a road renderer in ARIAT is that it’s supposed to be happening in a city with tall buildings everywhere, so I’ll have to think about that somehow.

Also, I’d like to introduce a proper curve for the road, with slight bumbs too. And an actual gameplay too!

Left is unsorted, right is sorted. Looks much better!

This looks so good!