Back in November 2019 (wow, time flies!) I’ve made a little prototype of a roguelike for the Java Game Jam.

This is an entry for the Java of the Dead game jam. It’s still a very early prototype and has some weird bugs. Occasionally, something spooky happens with the RAM and innocent, unsuspecting variables overflow and break stuff. WoooooOOooo…

But it should be stable enough to play through. Special thanks to my husband for making these awesome graphics! Also, thank you for doing “backseat programming” and suffering my grumpiness while trying to fix those bugs.

As usual, most of the ideas were not implemented - like inventory, equipment, story, tutorial, some kind of level-up/skill system and generally more content and more gameplay. And audio.

However, during the Java Game Jam I realized that I really don’t like Java. I use it at work and I can live with it, but it’s not fun for me. So, recently I gave the Pokitto Python editor another try. I wanted to do something with this fancy TAS mode and remake Tygro. It would be a shame to let these cute graphics go to waste.

One of the things I learned on the first day after many hours of fiddling systematic debugging and skimming reading the docs: 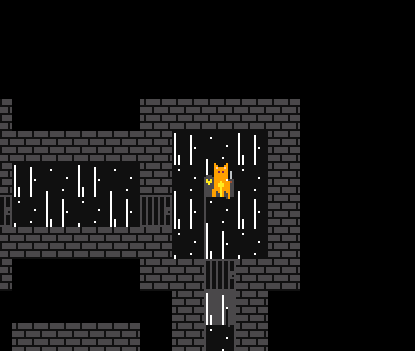 Once that was sorted out, I implemented player movement.

In the prototype version the player and enemies just “teleported” to the next tile - like in a command-line based roguelike. This works, but it’s kind of lazy, so I wanted to do proper movement.

At first, the character could move freely on the non-blocking tiles, but I wanted to keep the turn-based approach of the prototype and free movement wouldn’t work so well with that. So now, the character stops moving when it’s fully standing on a tile and no movement key is pressed - or when the path is blocked.

So far, you can walk through a handcrafted map with a cheap “hopping” animation and interact with doors and chests by pressing “B” to make them disappear (and non-blocking). So collision detection and map drawing works. And the code hasn’t turned into a complete mess (yet). Overall, I like TAS mode.

The interaction is only applied to the tile that the character is currently facing. But since there is only one image, you can’t see which tile that would be. This should probably be fixed. I would just flip/mirror the image to indicate facing left/right, but I don’t think I can get away with it this time, because Tyger is holding a sword in one hand and a shield in the other. If I flip the image, then the sword and shield would flip hands. (Also, I just noticed that the character is left-handed.)

Maybe the eyes will move a bit left/right/center. Drawing the backside shouldn’t be too difficult, I hope…

So, next target (low-hanging fruit): Visualize where the character is looking.

Actually, I’ll be quite busy in the next months, so let’s see when I get to write the next update. But I definitely want to get back to this!

I hope you find time over the next few months to keep improving it.

I liked the original Tygro so I am waiting for this to finish!

The devlog is a great idea too.

looking forward to this

Thank you for the kind words. This is actually quite motivating.

So, showing where the character is looking was pretty easy…

I guess it would look nicer if the character’s posture changed a little, but just having the eye movement is already an improvement.

I could add enemies, but I haven’t decided on how the player would fight them.

Would you still “run into” them until they die, like in the game jam version? Or press A to attack in the direction you’re facing? Some kind of ranged combat mechanics and magic would be nice…

Or would you transition into a separate battle screen where you can select your actions in a menu (attack, use magic, items, flee)? I’ve already done this in a little RPG game and it worked ok, but the other idea sounds more interesting.

It could still be kind of turn-based: The player does an action (turn, attack, use - or do nothing for a certain time) and then the enemies act. Maybe some enemies act slower and others act faster (move faster?). This way, the players need to pay more attention to where they are going, avoid getting surrounded - or actively try to get surrounded to cast some area of effect spell like “Burning Ring of Fire”.

“run into” them until they die

If you want to look at some other games that do this,
Quest of Dungeons (a Roguelike) and Fairune (a strange minimalist Zelda-lite) are two examples.

QoD is one of my favourite Roguelikes because I rarely feel like I’ve invested enough in a runthrough to be disappointed when I die.
(It’s also turn based.)

For those who don’t get the reference:

Sorry, I cannot comment about the game mechanics. I have not played many games like that (RPG).