I learned enough from filmote’s tutorial today that I thought I’d throw some code at it and see what stuck. It’s slow as death, but it actually came right up. I didn’t do anything with the colors I think they halfway match up accidentally. 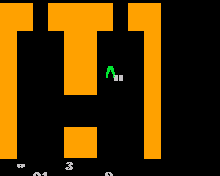 I’m sure I’m doing everything wrong but just thought I’d share. (not sure what 118% Flash means but it sounds bad

“118% Flash” means that you’ll overwrite the loader if you try it on hardware and you’d need to use the USB method to change to another game. In development that’s OK, but it’s good to get that below 100% for the final release.

Great work … If you post the code up in GitHub people will be able to give you some tips on how to reduce that 118% and maybe speed it up.

Nice, it looks a lot like Haunted House on the Atari 2600!

THE TALE OF THE HAUNTED HOUSE

Many years ago in the small town of Spirit Bay, there lived a mean
old man named Zachary Graves. Old man Graves was not a very well
liked person. He rarely left the old mansion and spent most of his
life brooding about the decaying, four story house. When he died, the
house was condemned and locked up.

The townspeople claim that old man Graves knew the whereabouts of a
magic urn that was a family heirloom of the first family of Spirit
Bay. It seems that the mansion was the family’s first home and that
the magic urn, which broke into several pieces during the earthquake
of 1890, is still in the old house.

To this day, no one has had the courage to go into the mansion to
search for the pieces of the urn. It is common knowledge that the
ghost of old man Graves still haunts the mansion. Some of the
neighbors claim to have seen lights flickering in the windows. Some
say that they have heard eerie sounds, doors slamming, and heavy
footsteps. Some even claim to have seen shadows running through the
mansion.

The mysterious mansion has 24 rooms connected by long corridors and
staircases. Some of the rooms have been locked up for over 50 years.
There is supposed to be a master key hidden somewhere in the mansion.
Without the key, it might be impossible to travel from room to room.
There is also an ancient scepter hidden in the mansion. Old man
Graves always carried this scepter. He believed it scared off evil
spirits.

How is this game dev going?