Has anyone thought about a roguelike? Any good versions to start looking at?

could make one from scratch, if anyone knows a neat graphics style?

Really want that. Personally I prefer ASCII graphics (NetHack, Adom). Using only dir pad and 2 buttons could rise some problems. It definitely needs a different implementation.

only realy played pokemon mystery dungeon and dwarf fortress adventure mode in this genré
so what exactly do you need?

The original Rogue will probably run fine on the Pokitto. It wasn’t very memory/storage heavy, and it is still a blast to play.

Yes. Now we need a good source code that is not PDP-11

dont realy need a mode for that, just need to extend print to do color
but giving the simulator 220x176 would be help full we could do the rest

There are roguelikes that use a limited input methods sucesfully. Few that come to mind are:
Pixel Dungeons -an open source mobile roguelike
DoomRL - renamed now to avoid a cease and decease
Fire & Brimstone - a pico8 roguelike (so only d-pad + 2 buttons).

Most “coffeebreak roguelikes” use limited amount of keys, as many of the 7DRL ones.

So it is more than doable. To do this we would need to change our thinking from pressing a key to do stuff, to pressing a key to accessing a menu of available commands. Alternatively we can just limit/streamline what a character can do, similar to how Fire & Brimstone (and many 7DRLs) does things.

As for art, I am happy with ASCII (although pixel art like this is also awesome), especially that it will give us a larger view of our surroundings (due to resolution and ability to make fonts smaller than 8x8 pixels). I can also work on a PETSCII inspired font by adding ASCII characters past 127. This way the programmer would have access to a larger selection of “sprites” for walls and such.

That 1-bit tileset is SO HOT! Can we make something like that for 220x176 resolution? 1-bit with free color.

That 1-bit tileset is SO HOT! Can we make something like that for 220x176 resolution? 1-bit

We can, but it depends if we want to. The tiles in the example are quite “large.” Larger than 8x8. Probably 16x16 pixels, which would not give us much room to display the game at this resolution ( roughly 14 columns by 11 rows). It wouldn’t be a problem for the rooms, as we can easily build it from smaller tiles and allow character to overlap a tile, but characters would be tricky in 1bit on a scale smaller than that. I could probably squeeze some characters into 12x12 or even 10x10 if needed, which, at this resolution, would not be too bad space wise.

Nevertheless, if there is interest, I will give it a shot. Would it have to be a font file or something like a 1bit .png?

could get a 640 byte array for the display with 256 color, and actually dont need a screen buffer since there is no overlap

I can see what I can do with 11x11 sprites. We could probably get more out of it if we had overlap (so we can use a 11x11 character and add a weapon/shield of a different color), but hopefully this can get us somewhere.

Also, I was just looking at some small/coffeebreak roguelikes. They seem to get away with a playing area around 14x10 tiles. I will need to do a bit more research into it. Hopefully I will have some findings tonight in the evening.

Thats the way I always start. I draw a picture to see if it “feels good”. Then I figure a way to code it.

I am also looking for a good roguelike c++ source to start from. @adekto any ideas?

The tiles don’t have to be square. They can be 10x11 or 11x8 or whatever feels the best to maximize the use of the display. Text based roguelikes have characters that are much taller than they are wide and they still play very well.

im trying a mockup for a graphics version, went with 16x16 sprites and the lost pixels turned into a hp/mp bar idk if these games really use it, also tried a bit of a font and a more finalfantasy/pokémon type menu window system
in level graphics i would keep most stuff grey exept maybe blood and goo or ui indications 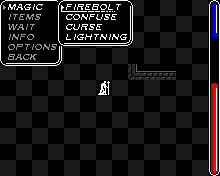 by all means plz improve on this, its far from compleet

i did not find much source code for roguelike’s but not to hard too do, if you boil it down its finding a good room algorithm and balancing items

speaking of the map generation do we make its all in a tile map array or do we recalculate each step to a screen sized tile map array, i mean it would be slower but gives us allot bigger levels? this is probably a bad idea

Powder is a classic. Love to see a port of that. It’s very hard.