This is a non-binding, no-problem-if-you-change-your-mind poll about the possible game project, Pokitto Party (a Mario Party esque). The result of this poll will affect if this project will become reality.

Poll: Are you interested to possibly contribute to the collaborative project of creating the “Pokitto Party” game? Choose one or many things you could contribute to.

For those who are not familiar to (Super) Mario Party games, here is a short explanation:
The gameplay is a board game like system where players you go around the track in turns and throw a dice. There are many action spots on the board and many of them launch a minigame, where players can collect more money/points by winning. The minigames can be as simple as “find the pair” or more complex ones, but usually take less than a minute to play. There can be tens of different minigames. 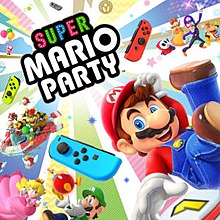 Super Mario Party[b] is a party video game developed by NDcube and published by Nintendo for the Nintendo Switch. The eleventh main entry in the Mario Party series, this game was described as a "complete refresh" of the franchise, bringing back and revitalizing gameplay elements from older titles while also introducing new ones to go along with them. It was released worldwide on 5 October 2018 and sold 1.5 million copies by the end of the month. As of June 30, 2022, the game has sold more than...

Would a WarioWare type game also be in concideration?

That would be fun too

Depends on my time, but i can help test stuff

Good! This is not binding so you can just press the poll option.

Oh, there are so many people interested in contributing to the project!