Making of Prince of Persia

I’m gonna buy this. I will tell you if its good 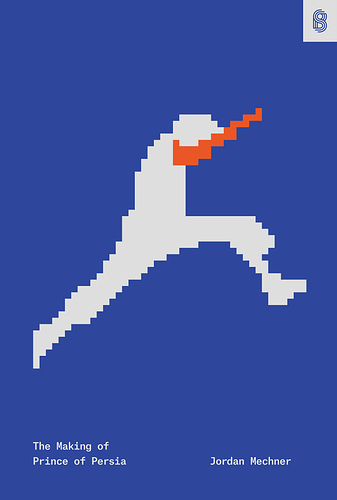 Jordan Mechner - Store | The Making of Prince of Persia

Before Prince of Persia was a best-selling video game franchise and a Jerry Bruckheimer movie, it was an Apple II computer game created and programmed by one person, Jordan Mechner. Mechner's candid and revealing journals from the time capture his...

Hardcover of ebook? It’s tempting me.

I tried to buy it. The paypal failed not due to me

There appears to be a hardcover copy available for pre-order through amazon. So very tempting, this was actually one of my favorite really old school games.

This is a fantastic game!

I also really liked Karateka and made a clone of it on the Arduboy. I tried to contact Jordan to get his blessing but got silence … really disappointing as I think he would have loved it.

I also really liked Karateka and made a clone of it on the Arduboy.

I’m not seeing that one on the Pokitto. Why is this?

Its an undertaking! I would love to spend the time to do it properly though.

Edit: Actually do you mean Karateka or PoP?

Jordan Mechner is an unique individual. There is no doubt about it.

Its a diary, with lots of his internal musings and thoughts. Do not expect a super-edited biography

That is also what makes it an interesting read

Then a strange thing happened. I started getting images in my head of the characters: The Sultan. The Princess. The Boy. I saw the scenes in my mind as if it were a Disney movie. So I wrote up a scenario — churned it out in an hour. It came out pretty well, I think. It’s just similar enough to Karateka, but more plausible, more intricate, and most important, more humorous. Gene will love it. Maybe the back story could even be written up and illustrated, like a comic book, and published with the game.

Still not enough.
What’s the point in running, running to get to the exit, if all it gets You is more of the same?
The princess waiting at the end is a reward only in the story. We need rewards in the game – like beating a guard in Karateka. What makes a game fun? Tension/release, tension/release. Prince of Persia has neither. It’s like going on a 25-mile hike. Every now and then, you get To step over a log or cross a stream. Big deal.
Running, jumping, and climbing, no matter how beautifully animated, hold your attention for maybe the first three screens. Then
you start to wonder: when is something going to happen? Like: a guard to fight. An airplane to shoot down. Something.
There need to be sub-goals. Places where you can say: “Whew! Did
it! That was a tough one!…What’s next?”
Like:
• clearing a screen in Asteroids or Pac-Man
• beating a guard in Karateka
• solving a level in Lode Runner
Right now, solving a level in Prince of Persia has none of the feeling of accomplishment of any of these. It’s more like “Oh… so that’s the end. Oh.”

You get a smaller version of the “Whew! Did it!” when, say, you clear a difficult area (Pac-Man), or drive a guard back with a series Of blows (Karateka), or retrieve a hard-to-get sack (Lode Runner).
Conversely, you get the “Oh, shit…” reaction when you accidentally split up a bunch of bigger asteroids into more smaller, faster ones; or when you finish a pattern and see that you’ve missed one dot; etc. Some setbacks are fatal, some are just irritating. But
when they happen, you feel they’re your own fault.
3. You can hold off on the next task, waiting for the right moment, before saying “OK… Now” and going for it… plunging into a period
of higher tension, higher chance of either a setback or success.

Persia has none of these features at present.
If the sub-goal is “solving the level,” you need a consistent visual indicator of how close you are. You don’t just stumble onto the exit and say “Oh—guess I’m done.” Or stumble onto a sack of gold and
say “Oh—here’s another one.” That’s why collect-the-dots games like Lode Runner and Pac-Man always show the entire screen at once.
That’s key.

But POP doesn’t show the entire screen at once. That’s a problem.

I am amazed. This is Jordan Mechner, age 21, writing about computer games in mid 1980’s

This is very eye-opening to me!

You get a smaller version of the “Whew! Did it!” when, say, you clear a difficult area

Conversely, you get the “Oh, shit…” reaction when you accidentally split up a bunch of bigger asteroids into more smaller, faster ones

It’s called operant conditioning.
We learnt about it in my college psychology course.

The idea was developed first in the late victorian era by Edward L Thorndike and his ‘law of effect’,
and then further developed by B.F. Skinner from the early to late 20th century.