What have you been working on regarding the PinePhone? I thought it looked interesting, but I never got one. If you have one, what is using it like compared to an Android device?

Like the post I broke this from, I have been working with the Fedora Project to get that running on it. (Fedora Linux).

Overall it definitely feels more similar to working on another single board computer (like the raspberry pi) than it does a “phone”. Which, to me is good.

I’ve got two versions of the phone, and both I would not at all consider “consumer” ready for folks expecting it to work as a convenient replacement for Android or iPhones. It is seriously still in development

I have been using it as my daily driver for a few months, and it is the most inconvenient experience xD between poor battery life and currently my own goof with audio profiles. It is also tricky because Fedora works in an upstream policy, which means that downstream patches aren’t necessarily acceptable, and in the current state for Fedora not using a pulseaudio patch is a big bummer for calls. It works with some tweaking

what is using it like compared to an Android device?

Specifically to answer this, it is amazing. I compare it to my latest android Samsung S7 running android 8, in that regard it is really awesome, because compared to my android phone it actually gets updates. I can tweak everything just like on my desktop. I can run many of the same programs as on my desktop! The trick there is that many/most don’t have adaptive code so they don’t quite fit the screen nicely, however I do have a dock where the phone can run in docked mode so using regular apps like a desktop is not a problem

If it does texts and calls, and has a phonebook, calculator and alarm then it already does everything I’d want from a phone.

I can run many of the same programs as on my desktop!

If it removes Java out of the equation, we already have like a 1000% improvement.

Well, it does. But I use desktop java with openjdk now instead of androids goofy dalvik java or whatever it is

I suppose this also counts since it has a SBC: https://pine64.com/product/pinecil-smart-mini-portable-soldering-iron/

Looks like Pine is just going to keep making cool stuff I want until I finally relent.

Be careful, once you do, you’ll just want more and more. I say this as an owner of 2 PinePhone, a PineTab and a Pinebook Pro. While waiting for the PinePhone keyboard case xD

If it does texts and calls, and has a phonebook, calculator and alarm then it already does everything I’d want from a phone.

You may want to switch to MAKERphone like me 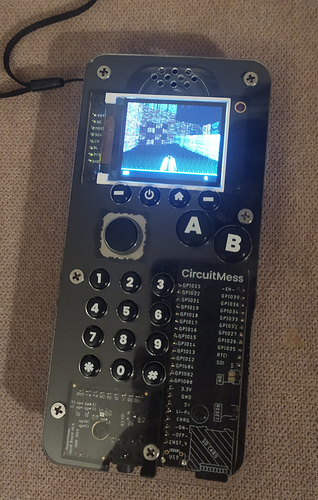 Been using it as a “daily driver” for a week now.

I keep going in circles about that one. I really would like it

but I’ve already got 2(and one on the way) linux specific phones to hack around with.

But I am missing the ability to take pictures sometimes and having a Linux computer with me all the time sounds cool, so once there is something nice, tested and affordable I’ll be thinking about buying it. So thank you and please keep working on Pinephone @torbuntu

I do what I can

how does the Ringo feel for calls and sms?

how does the Ringo feel for calls and sms?

So… calls are okay and I successfully call people but they’re a little noisier than normal phones and today I had small issues, it seemed to handle weaker signal not so well – if you depend on your phone a lot, probably don’t use this. It can’t read unicode in SMS (replaces with *) and current firmware doesn’t allow you to write longer messages because the typing screen doesn’t scroll, so you have to fit it onto one screen xD Also there are bugs sometimes, it lights up the screen seemingly at random times, one time it slowed down extremely and I had to restart it, but it’s definitely usable. And it has super nice simplistic “apps” and extremely cool RGB LEDs on the back, which I totally love.

It would definitely benefit from more developers fixing the small bugs in the firmware, if anyone is thinking about buying it.

Good things to note. I’ll keep it in mind

When I first saw it in the kickstarter/crowd funding thing it only had a 2G modem, so would be actually useless as a phone in a small number of years. So that stopped me dead that time. But it seems to have upgraded that now.