I’ve created pretty simple chess for Pokitto, using SAF and my chess library/engine smallchesslib found here. Graphically it’s nothing impressive, just very simple interface, I was focused on just making Pokitto play chess – if you want, you can use my library to create something more shiny. Of course everything is CC0, public domain.

The library/engine is another one of my KISS/suckless C libraries, it supports all you need for playing chess and manipulating some standard chess formats plus it includes a moderately strong AI – the strength depends on settings and hardware, I’ve let it play as a bot on lichess.org under the nickname smolchessbot and it achieved an ELO of about 1600 (well not really ELO but “Glicko” rating). On Pokitto I’ve limited AI to maximum level of 3 (full search to depth of 2 plys with possibility to extend to another 2 plys for interesting moves) which is a little weaker than this, it’s because of the CPU speed, something stronger would take too long to compute a move. In the future I’ll probably try to optimize and improve the AI, e.g. with transposition tables, so maybe it will get stronger and faster over time.

Some features and limitation of this program:

Oh wow!!! Chess! This is something I often wondered about if a chess engine would be feasible

If you’re on liches you can also challenge the bot, he’s online most of the time (when I have my laptop on).

Nice! Time to test my skill Vs Pokitto.

Wow, look at the code. Its 600 lines with some vertical spacing. I am not I can write a menu system in less lines than that!

@drummyfish hey hey hey. The Queen and the King are the wrong way around in the start of the game

The king is on the colour (white king on white square). I just confirmed that it is indeed the wrong way around in this chess game 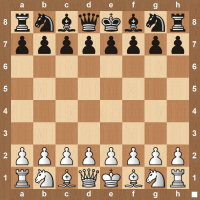 however, in your game (the selected piece is the queen and should be able to move forwards more than 1 square)

No, you’ve got it wrong

Queen starts on its color.

gosh. does this mean I have set up the board wrong all my life?

The queen has the pointy tiara-style crown (♕, ♛) the king has the more domed crown (♔, ♚).

This is also missing from the gamedisk, I will make a POP for this