I took @andrea_i’s Pokifactory and rewrote it using MiniLib. Code is written from scratch, but I used most of the original graphics with some changes. I tried to send pm but haven’t got any response. However, I think it’s ok based on what @andrea_i wrote on the Pokifactory thread:

I’m totally happy for anyone to tear it apart as they please. If one day we can play that thing on our pokitto I can only be grateful really!

So here it is:

This project was mainly to see if I could make a complete game with the basic graphics and sound functions I have added to MiniLib.

I wanted to mimic the old electronic games, so instead of movable sprites I’m using sprite sets that are like bit sets, but every bit controls visibility of corresponding static sprite. Bits can be shifted left or right just like in a bit set, so I can e.g. move all items on a conveyour belt with a single shift command. Everything is drawn directly to LCD, no screen buffers used.

Game supports saving highscores in a cookie, but it asks you before creating the cookie. The code is based on the PokittoCookie class, and assuming I didn’t do some horrible mistake, it shouldn’t accidentally erase all your saved highscores of other games.

Making it compile with PokittoLib should be easy if there is demand (to add the loader).

You should be able to enter the loader by calling exit(0);, no need to switch.
The code for this is in startup.cpp.

woah @jpfli that is so damn awesome! and the pixel art has been improved too!! AAAHHH I’m super super happy about this : D

Well if you Hold C while turning on the pokitto you can still get to the loader.

I HAVE to try this asap, tomorrow is my day off, so i will play evercade and …

Ah, ok. I wasn’t sure if holding C should open the loader and I only tested with my older Pokitto which apparently had some ancient version. It works now after I updated the loader.

There is now only one problem.

With Kong 2 and now this, I have no option but to recreate the earliest “video game” I remember encountering, the Nintendo G&W Greenhouse

When can this get put in the GameDisk repo so we who have the repo setup on our cards can just git pull? Also, I feel like that should be a tip in the magazine in case others don’t know that it is an option

There is now a POP file in the first post.

What do you mean by reset option?

It is brilliant well done! 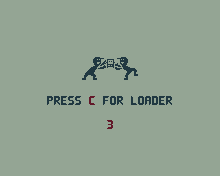 You should be able to enter the loader by calling exit(0);

I also added a check for SysTick counter rollover in the function returning current time. It sometimes happened that the SysTick interrupt was triggered while executing the function and the returned time was off by ~100 ms.