In Incipient you control a creature and attempt to eat the body parts of other creatures (healing damaged parts in the process) and then consuming the creature itself and assimilating one of it’s body pieces. Each piece you assimilate maintains the shape and color of the creature you got it from.

This game uses my experiments with Procedural Music with the tone and pacing being determined by your health, number of enemies, size of enemies, and if any enemies are chasing you, fleeing, or simply wandering around. 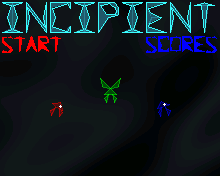 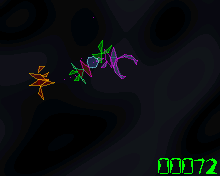 I tried the game. The gfx looked very nice. Also the creatures are fluently animated. The control feels almost like having an analog control

(no Joyhat used). Maybe the cuteness is not yet right there but as a technical achivement it is very good! Never seen like this in Pokitto before. The guy with the big scissors is scary

Nice game!! It really is a nice demake of Flow.

@Hanski no need to be cute i am sure, pretty sure was about cute or demake or both at the same time. One could argue that the creature are somewhat cute lol

Wow, this is a great showcase of what you can do on the Pokitto. The graphics are especially smooth and impressive, and I really like the commitment to drawing everything with the vector graphics and the way the main menu is implemented. I think the procedural music works, but can get a little weird sounding at times. I do like how it speeds up when you’re in danger.

The small play area does feel a bit restrictive to me, and I think I took damage multiple times from offscreen. I’m not sure if wrapping around the screen would make things too hectic, but it might be interesting.

I found the enemies fairly difficult to get behind and I couldn’t make my creature very long, but it feels pretty fair. I was a little confused about the mechanics of what happens when you and an enemy creature crash headfirst into each other. It seemed like sometimes I took damage and sometimes they did. My highest score so far is 184.

Wow, this is a great showcase of what you can do on the Pokitto.

Absolutely. I think the effects are fantastic!

I was a little confused about the mechanics of what happens when you and an enemy creature crash headfirst into each other. It seemed like sometimes I took damage and sometimes they did.

Actually what’s happening is each time your mouth piece is over an enemy body part it will automatically attack it. If it’s not damaged (isn’t an outline) it will damage it (leaving just the outline) otherwise it will destroy, and consume, the body piece. So what’s happening is both you and the enemy are attacking each other at the same time.

If a body part is destroyed the attacking head piece then digests it (the center of the outline gets brighter briefly) and passes it down to the next body piece in the chain. If a regular body piece is digested then the digestion will stop at the first damaged (outline only) body piece which will then get healed.

When a creature is down to just a head and a tail then attacking the link between the two will consume that creature. Consuming a creature will digest them all the way down your chain of body parts and when it reaches the tail you’ll add a new body part that’s identical to the shape/color of the creature you consumed.

Enemies won’t attack other enemies, so obviously they won’t grow in size since that requires digesting a creature. However, they will destroy your body parts and digest them healing themselves.

Once a body part is destroyed though it cannot be healed (you must grow a new one).

That’s not too bad actually. Though I’m waiting on sharing my highest score until I see what others have been able to achieve

The small play area does feel a bit restrictive to me

I originally wanted it to “scroll” with the player, but couldn’t get the mechanics working smoothly enough and it started having issues.

I think I took damage multiple times from offscreen.

Only if a body parts “weakspot” (invisible circle in the center) is offscreen is it immune to damage. So even if part of you is offscreen then the other parts can still be damaged. If a head is offscreen though then it can no longer attack. This is ensured by the circle-to-circle collision check which first checks if either circle is offscreen.

The organic movement of the creatures makes everything seems alive.
The first time one of the insects jump ahead really surprise me and quite horrified

The procedural music fit well with the ambiance.
If only I could add something, it would the possibility to move deeper in the screen, zooming in as the original game do.

All things accounted for, perhaps my favourite game from this jam

Looks cool but I have no idea what to do with the GitHub files, comes from my not using GitHub enough, there is a C64 emulator for the pi that I want from there but IM not sure how to download it, , ,

You can get the game by downloading the pop file in the first post and putting that to SD.

Generally Github projects release binaries under the “Releases” page in Github. If there are no releases, then you can get the source codes from Github and build the project yourself

I like it, it’s a little hard to line up bites but it is nice.

pics and description it reminds me of Flow, from the ps3/psp

That’s actually the inspiration for it. Glad everyone likes it even if it is rather challenging.

I noticed that the game reads joystick axes wrong. Joystick forward moves the creature to the right, joystick right moves it down etc. I didn’t realize it at first, because Incipient was the first game I tested as I was assembling my controller. When I tried other games I found that the joystick orientation was not right, and had to rotate the joystick board 90 degrees ccw.

Here is one way to fix it. In the init() function set joyhat orientation to portrait:

If I understand correctly, portrait joyhat orientation is when you hold pokitto upside down. But because the coordinates in the game are defined in upright orientation, you want joystick x and y inverted.

Hmm. I’ll have to retest the joystick input cause the way the game works it shouldn’t matter if you hold the pokitto sideways ?portrait) or upside down (landscape, which is what I tested). It was working when I set it up initially but maybe something broke along the way without noticing.

Just to check, when you say ‘portrait’ and ‘landscape’, you mean the screen, not the Pokitto itself?

Yes. I’ve always heard it referred based on the screen itself not the device. To be fair though most devices these days the screen takes nearly the whole face.

Thinking about it, the vast majority of devices have the screen and device aligned so they both have the same orientation. The Pokitto is an unusual exception.

The Pokitto is an unusual exception.

And the Arduboy and Gameboy.

Those too, but they are still in the minority. Devices where the device orientation matches the screen orientation include the majority of phones and tablets, the GBA (and variations thereupon), the DS, the 3DS, the PS Vita, the Wonderswan, the Game Gear, the Dingoo…
I could go on, but hopefully that’s enough to make the point.