I’m starting on a game rather late, but I really wanted to try to complete something for this jam.

I ended up not having enough time for some of my more ambitious ideas, so I ended up going with an idea that someone close to me had suggested instead. It’s a sort-of-demake of a singleplayer mobile deckbuilding game called “To Arms!!”. However, I’m changing up a lot from it. While I’m using a lot of the core ideas from that game, I’m changing it to be 1v1 pass-and-play multiplayer. I’m also hoping to make an AI opponent.

The game premise is that you are in charge of a group of cats, and you want your opponent’s cats to run out of patience before yours do.

You have to manage two primary resources, treats and pounces. Treats recruit more cats, and pounces defeat “enemies”, like bugs or dogs, which use up your cats’ patience. A defeated enemy will go in your opponent’s deck and cause problems for them. Unwanted cards can be “adopted” and removed from your discard pile. You can recruit new and improved cats in the shop. Both the shop card pool and enemy card pool are shared between you and your opponent.

For the first devlog, I have made the basic framework for drawing cards, buying cards, and attacking “enemy” cards. Here’s the progress so far: 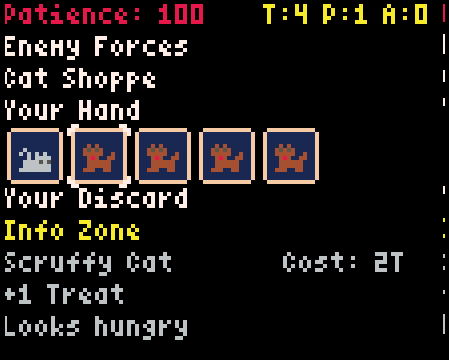 Devlog update: 2-player pass-and-play now works, and I added a simple AI opponent as well. I also did a lot of rebalancing, and probably have a lot more of that to do still.

Besides rebalancing, the bulk of the work left is to draw the images for all the cards. For most cards, I just have a “?” placeholder icon right now. I have 24 cards so far, and I have been adding cards as I keep thinking of new ideas.

I’m not sure whether I will have time to add much else, but the game is already playable, and it seems like it could be pretty fun once it’s balanced. 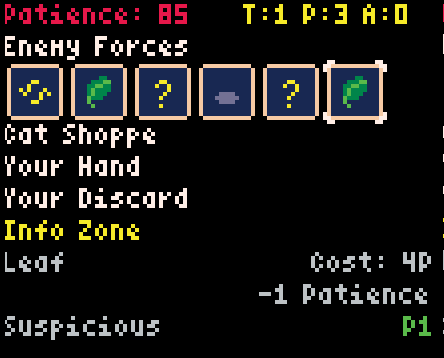 I did more rebalancing and managed to add a simple tutorial, so now all the instructions on how to play are contained in the game. I still have a lot of card graphics to go, but after that the game should be basically ready for initial release.

Here’s a part of the tutorial: 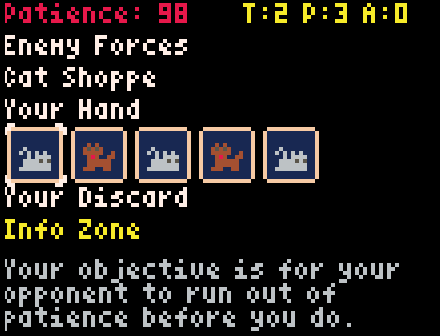