I’m just having so much fun with crabator! Anyone beat my score? 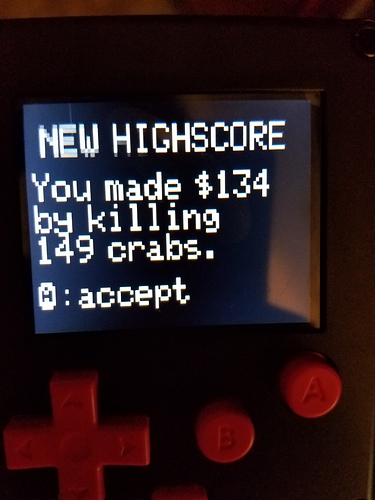 I will try to beat it and post a screenshot too. I have some forced quiet time for a couple days.

Awesome! I’ll try to improve my score though

so itll have to be a good one

Is it just me or saving doesn’t work on that game on the pokitto? I tried to save and going to the highscore screen I see only zeros…

It has been a long time since I played this but I think I had the same problem. I think not every feature was ported from the gamebuino version.

I’ll take a look at the Hscore thing.

I have a feeling I already solved it. Are you sure you are running the latest version?

I’m running from the new v10 loader and 100 games package.