Hi! I just got my Pokitto in the mail and I was very excited to start assembling it. I followed the instructions and clicked together all the part except that, at the end, one of the corners was a bit raised because one of the black pegs that holds the front and back together has a thick rim along the edge. I pulled it apart again and, among further inspection, realised that the pegs looks the same from a far but in reality, one is a different size than the rest. It has a larger rim and is missing the two slits near the middle. I finally removed it from the front of the Pokitto, but I can not seem to remove it from the back. Does anyone have any tips on removing the mutant peg and/or where I could find a place to buy a new fitting one? Thank you very much 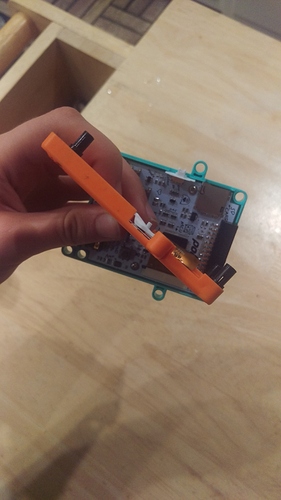 As for finding a new one: the pegs are just black Lego pegs. You can buy them online or at a Lego store.
As for getting it off: I’d personally look here.

Oh, I didn’t realize until now. Thank you for telling me!

Hi! I am very very sorry for the wrong size peg. It’s amazing that there is such a peg, because we buy the pegs directly from Lego distributors in Germany in big bags (1000pcs).

If you have problems finding the right pegs, I will post you some more.

How strange! I shouldn’t have much difficulty getting another now that I’m aware they are Lego pegs, but I will message you if I do. Thank you for the offer!

Mine had the same issue. Seems like some of the old style snuck into the mix. I just trimmed the belt around the middle down.

Funnily enough, I just got my Pokitto and two of the pegs were the wrong size. Good thing I have a huge Lego stockpile in my basement

Funnily enough, I just got my Pokitto and two of the pegs were the wrong size

I need to ask Daniel what is going on. Does USA have different size Lego pegs !?!?

I need to ask Daniel what is going on. Does USA have different size Lego pegs !?!?

According to the link posted earlier, lego originally did a “unslotted” peg, which is slightly larger than the “slotted” peg that replaced it. If you’re getting pegs from two different suppliers, it’s possible one is shipping from older stock that still has some of the “unslotted” version. Possibly checking with them and specifying that you have to have the new ones will solve the issue in the future?

One of my peg is also wrong size. I get my pokitto long time ago but I think it’s just rare issue and 3 pegs are still nice to hold case together