Just a little topic to maybe have some standard/default palette that could be use by starting user/coder.

The DB16 - DawnBringer’s 16 Col Palette v1.0 is a very nice and smooth 16 color palette.
Less flashing than the pico-8 palette . 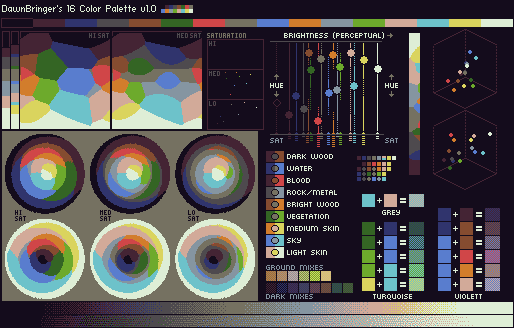 Some mockup using it : 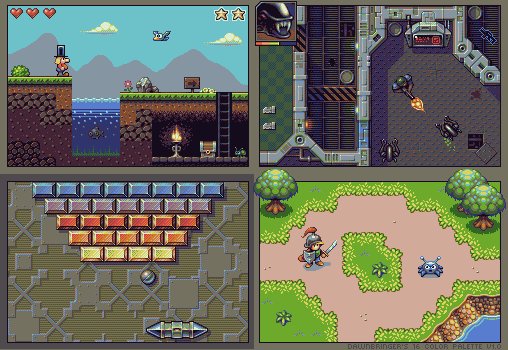 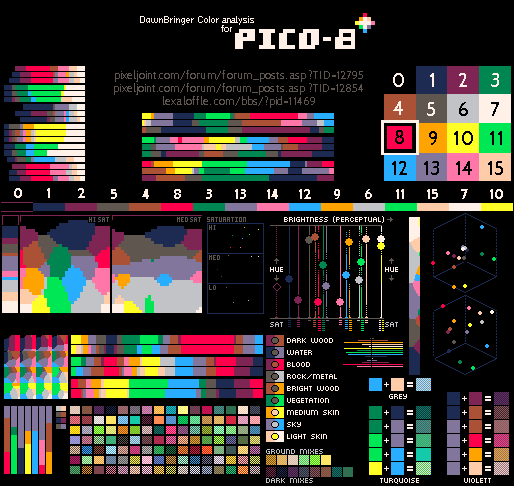 Here the mockup under the pico-8 pal : 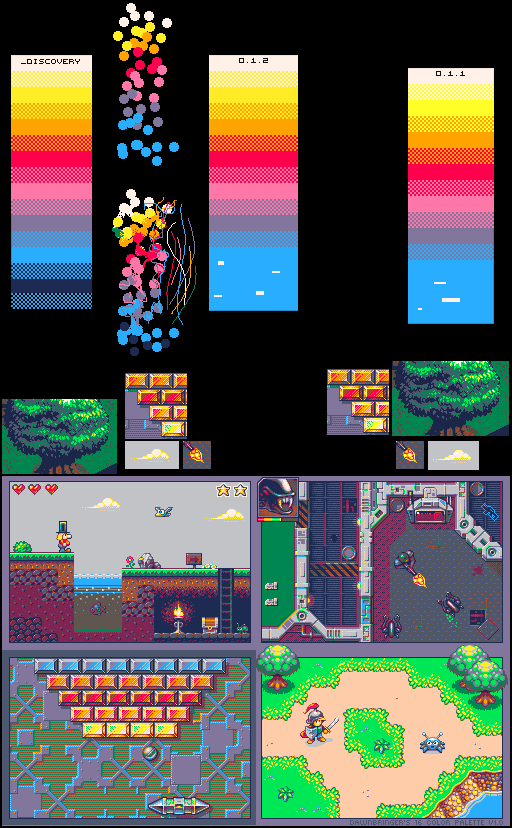 What do thing about it ?

There is quite a lot of good 16 color palettes. I would personally like if Pokitto came with few palletes to choose from, similar to what TIC-80 does (run it, type DEMO, then LOAD PALETTE and finally RUN to check them out). TIC-80 Includes both DB16, PICO-8 as well as other classic (c64) and modern palettes.

One thing that I was planning to do for TIC-80 was to try to organize a contest/challenge on pixeljoint to make 16color palettes (and maybe a game mockup with it). My idea for the challenge was to create a palette for a game theme/genre (e.g sci-fi shootemup). The list of those themes would be created ahead of time and participants could either choose them or be randomly assigned one.

i feel a thing your missing is the resolution, wich your heaving to balance good looks from usable view
16x16 are nice tiles but you can only show 7x5 ish on the low res mode

I think it would be down to the programmer/artist to make sure the games are playable on small screens by using good contrast.

yes i know but how to make sure exactly like would you have some general guidelines, im using 16x16 tiles for my platfromer and i think there a bit to big

heres another one mockup resize

The problem with choosing palettes is that we have no idea how good the actual display will render colors. Older games use super bright palettes because the TVs and monitors of the time had low contrast and would not render all colors that well. With the advent of modern high quality and super high contrast display palettes have been moving in the super-washed out territory. These will look amazing on modern displays, but we have no idea how the Pokitto display will render them. It’s a tiny display with low power draw, so chances are it will not be all that bright or high contrast, so we might have to compensate for that with a palette using highly saturated colors.

We’ll know more when we get the Pokitto in our hands.

The colors are actually not all that different from my laptop atleast. This is because both displays use same TFT technology.

Naturally, the colors versus a super bright OLED laptop screen is a different matter.

All in all I wouldn’t say the colors are half bad on the Pokitto screen, at least they are way better than what the old TV games used to have

@RogB_UK
added a couple of classic 16 colour palettes to #pokitto, #c64 and DB16. next, will probably be #ZXspectrum

I used that palette on my first Pokitto game, it looks a bit game boy colour-ish. It will probably look a lot brighter on hardware.