Your Pokitto - Show it to the World!

I can guarantee Pokitto is the rarest console in the picture… for the time being.

So which one is the rarest? To your right of what?

N-Gage!! I loved that phone way more than I should have.
Did you also actually use it as a side talking taco phone or was I the only one?

The LYNX too, though i’d prob miss that one more if it wasn’t for the battery life.

I used the qd version of the ngage, that was hold as a normal phone.

I can vouch for the nomad thing I got $150 for mine when I sold it two years ago.

How did you go about cutting off the arms and legs? I had been trying to figure out how I might approach it myself.

Not bad, but i more of a keeper instead of a seller

I sold mine Genesis with like a 100 games when i was a kid, that still hurts today…

I never could understand why people would want to sell their games or consoles.
I still own every game and console I ever bought, no matter how damaged or how lame they are.
With one or two exceptions, I think I’d regret selling them.

How did you go about cutting off the arms and legs?

I did each half separately, one tab at a time, before assembling it. It’s possible that you could just slice them off with an X-ACTO type hobby knife, but not knowing the properties of the plastic used, I didn’t want to risk cracking the case.

For each tab, I

The saw I used, pictured below, is about 18cm (7") long total, including the handle.

Another way I considered, which would probably work, would be to use a Dremel type rotary tool with a saw blade or cutoff wheel, followed by filing.

Awesome, thank you for the info! I’ll definitely need to find a similar type of fine saw and give it a go myself. Not completely confident I can get this thing back apart though, it snapped together pretty firmly.

My ex basically forced me to sell all my stuff, I miss it don’t get me wrong, not a lot left in my collection these days.
Hence why i like my pocket chip and want a Pokitto

If you do miss the old consoles check this out : https://retropie.org.uk/

It is a fun way to experience some of the older systems.

Another way I considered, which would probably work, would be to use a Dremel type rotary tool with a saw blade or cutoff wheel, followed by filing.

With a Dremel, even at the slowest setting (5000 RPM) you will melt/burn the plastic. I think a sharp single-sided blade will work better.

you will melt/burn the plastic.

That wouldn’t be a problem if you cut back far enough and then filed down the excess. I would make test cuts staring from the tips of the tabs to find out what speed works best and decide how close you can cut from the body.

Here is my Pokitto with Mt. Fuji in the background: 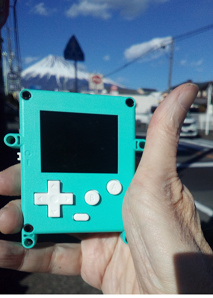 I had a little trouble keeping the buttons in place while I put the case together. Finally I ended up putting a piece of vinyl tape on the outside of the case across the button holes, and then I pushed the buttons into the tape. After that, no troubles.

It was cool to see Squiddy running on the real hardware. I was able to play through the “moving ball” level, so I guess it’s responsive enough. Now I need to go back and add sound.

It’s a great gadget. Feels good in the hands, and is fun to play!!!

Is it possible to get more levels in Squiddy? My kids have played it through many times and they would love to get more to play

Wow, it’s cool to hear that your kids played through all the levels many times! That’s great!

On the other hand, all of the current 31 levels were designed by Aphrodite for the original Pico-8 version, so I haven’t tried designing any yet. I could give it a go, though…

If your kids have any ideas for levels they want to see, they could design them themselves.
Just get a piece of graph paper, mark out a 16 by 16 square area, and fill the squares with these codes:

Send me a picture of the graph paper, and I’ll enter it in…

Or write a specification for the file format and allow someone else to build an editor.