This is my third game for Pine-2K. 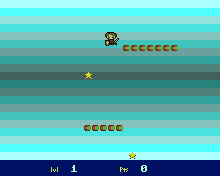 I was wondering if someone was going to try using raw files for sound effects. I got to a grand score of 13 before the jumping sound got on my wife’s nerves.

I got to a grand score of 13 before the jumping sound got on my wife’s nerves.

Nice score, but sorry to hear that. I got the sound effects from Sfxr. I had recorded a boing! sound effect with my own voice and a scream from my son that would play when falling down, but they were so terrible I decided to leave them out.

btw, I noticed you have a sin_8 function. Any reason why you use that instead of the built-in sin?

Didn’t know it was available

. Is it documented anywhere? I usually don’t read the manuals, but this time I had a quick look at both language.md and readme.md and can’t remember having read about it.

Turns out I completely forgot. I’m also not one for manuals.

Is it documented anywhere?

I found out about save, sin, and cos by opening the PINE-SDK.bin file in a hex editor. If you scroll down to the very end of the file you’ll see close to the end the list of functions including these three that aren’t documented. Unfortunately it doesn’t show the builtins because they’re hashed. Performance wise according to the all knowing @FManga when I asked him on discord the sin and cos functions internally use lookup tables so they should be quite fast.

Unfortunately it doesn’t show the builtins because they’re hashed.

Is this the way to go?

Apparently so. Brute forcing of all currently known builtins found 5381 to be the only seed (between 0 and 65535) that found matches for all of them (same hash used in the resource packer so no surprises and it only confirms my test).

Now I’ve got a cpp code checking all possible strings from 1 to 15 characters containing any combination of a-z, A-Z, and 0-9. Since there’s other data in the bin there will be a lot of false positives, but these can be easily filtered out with a simple pine2k script to check each one.

I will post a separate form topic once I’ve got the list and provide the details with the exact methods I used.

If you post the builtin names, can you wrap them in a spoiler tag? Just in case folks want to keep finding them with other means