This is the main project page of a game project of “Pokitto Party”. It is a Super Mario Party esque. For those who are not familiar to (Super) Mario Party games, here is a short explanation: 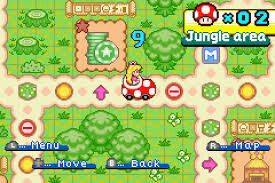 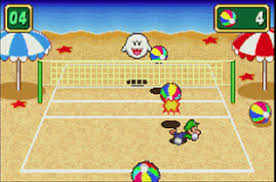 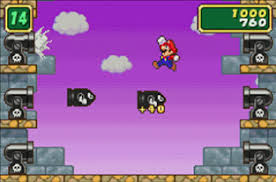 The gameplay is a board game like system where players you go around the track in turns and throw a dice. There are many action spots on the board and many of them launch a minigame, where players can collect more money/points by winning. The minigames can be as simple as “find the pair” or more complex ones, but usually take less than a minute to play. There can be tens of different minigames.

Pokitto party can be played as a single player game (at least in a minigame training mode) or a networked multiplayer game.

Here is a rough estimate of the phases and tasks (thanks @carbonacat !):

Everyone, whether you will be contributing to the project or not, what features you would like to have in “Pokitto Party” ?

So, in Super Mario Party the players can select one of the well-known characters to use on the board (Princess Peach, Mario, Luigi, etc.)

Do we have some “iconic” Pokitto characters that we could offer? We should ask the original artists/developers for permission, of course…

Although we could also use Pokittos with different colors and faces, that would be ok and easier to do, too.

There are also Matti, Watti (evil Matti), Katti (a cat) and Dogminator

Features:
Collectables like coins and highscore lists
Cards you can pick up and use anytime before each round to alter some game elements (let someone skip a round, go backwards, etc.)

A suggestion: the host client could be running in the server machine. The host would not be participating to the game, just hosting it.
Benefits:

Basically the host would be a “plug-in server logic” module.

Although we could also use Pokittos with different colors and faces, that would be ok and easier to do, too.

Maybe it could start with these and have the iconic characters as unlockable based on winning a number of matches or completing a mini-game based on their game theme or something such as this? I definitely agree having some familiar characters from Pokittoland show up would make the charm go up

Features:
Collectables like coins and highscore lists
Cards you can pick up and use anytime before each round to alter some game elements (let someone skip a round, go backwards, etc.)

I am a huge sucker for collectibles

Does anyone know a good tileset which would suit to this game? I was thinking about 2d tiles a bit like the GBA version of the game in the pictures in the top post. I guess the size of the tile could be16x16 on hires, 220x176 pixels, 256 colors, screen mode.
The tileset can be free or paid.

Not bad at all

Or how about this?

So long story short I had this massive inspiration about one year ago after playing Stardew Valley to make an RPG or something similar in style to Stardew Valley. Wasn't really sure. I was bound determined to make this game. Well I bit off more than...

It’s not as cute as the Cute RPG pack, though.

Probably my all time favorite tileset from OGA is this: https://opengameart.org/content/zelda-like-tilesets-and-sprites. It’s 16x16, very rich and looks awesome, and it’s CC0 (I don’t favorite anything else than CC0 xD). Here is a preview I made of it: 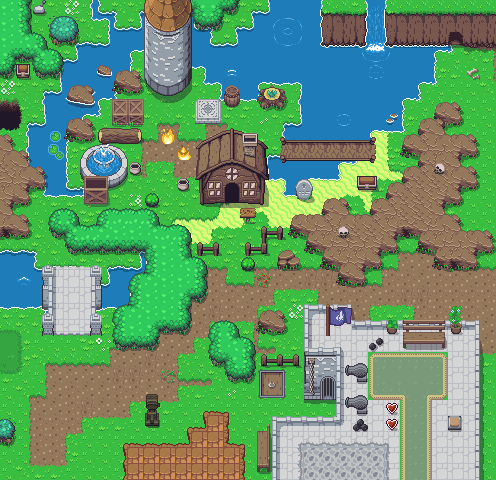 I think Watti, Katti, Dogminator, Malice and the ubiquitous Pokitto Statue fit quite nicely to the tiles 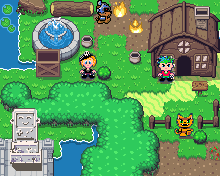 What about the color palette? How many are there/how many will the game need?

The current plan is to use 256 colors, probably the Miloslav palette (?).

I doubt I will not match Vampirics’ or Jonne’s creations, but I try to at least capture the bouncy walking style and the wavy hair

My first attempt to make the Matti character.

Edit: And with sunglasses, because…err…why not?

Edit2: A bit more grown up.

There is a modified Miloslav palette with #000000 black that isn’t considered as transparent. We’ll need nice outline!

If we need alternate colors, it could be nice to use a reduced palette (16/32 colors but we can use any size actually), so we can recolor with just a palette offset (e.g. sprite has color 5, recolor is 16, final color is 21).

We can also use an intermediary palette which can be used to recolor on the fly - but is more costly in CPU (I used this in TASUI).