Came across this nice iceberg, it’s gold. Feel free to discuss these obscure topics. First one that got me was Openoffice doesn’t print on tuesdays bug 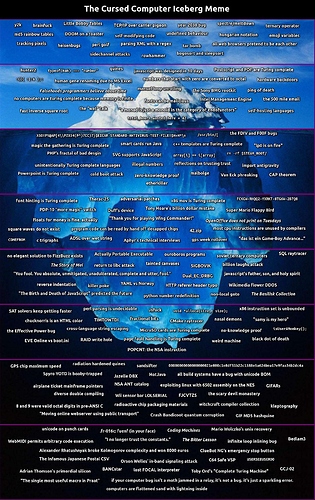 I have very mixed opinions about the choice of topics, topic titles and ordering.

E.g. The blockchain one in ‘deep water’ is a complete non-story, three of the topics are about “trusting trust” and more people are likely to know what a zipbomb is than know that 42.zip is a specific example of a zipbomb.

That said, “YAML vs Norway” and the statistics about x86 instruction distribution were quite interesting.

Noting that several of them are ‘X is turing complete’, they missed out a pretty hilarious one: printf. The paper proving turing completeness is here, but for those of us who find scientific papers horribly boring, I refer you to printbf - a brainfuck interpreter running via printf format strings.

The ordering can never be done right because of at least two things:

The same goes about inclusion and exclusion of topics, it depends entirely on the author’s specialization and preferences. Icebergs can never be perfect.

Anyway I see the valuable point being in this presenting someone else’s knowledge and view of the topic – being able to look at this teaches you many things you weren’t aware of.

So what you consider basic someone considers obscure and vice versa.

Yes, but even then there’s an average of what’s well known and what isn’t, which I presume is what this is supposed to be attempting given the poll linked to at the bottom of the webpage.

At any rate, I’m not judging it solely by my own knowledge, I’m judging it by what I believe the programmers I know and have encountered are likely to know about and by simply reasoning about available coverage of the topics and how often I’ve encountered a topic being mentioned by others, as well as whether said topic is anecdotal (e.g. Grace Hopper’s moth, the story of Mel) or specialist knowledge (e.g. zero-knowledge proofs and boolean satisfiability problems).

The article isn’t actually about blockchain or how it works, it’s about how loads of people started getting excited about a hash having the number “21e8” in it (which has about a 1/65536 chance of happening). The article ends with “Conclusion: This is a Non-Story” in big, bold letters.

I.e. it’s not even technically interesting, it’s like one of those “woman sees face of jesus on toast” articles.

Yes, I read that one. It reminded me of a programme from the 80s I watched talking about the changeover from copper cables to fibreoptics.
A fun fact about Sendmail: it was written by Eric Allman, for whom Allman style bracing is named.