If so, Pokitto needs your doodles.

Send a doodle to doodle@pokitto.com and it may end up in the product itself!

Need for speed!
If you can make it quick (in about 24 hours) your doodle has the best chances of getting in extra special places on the product. Late comers are accepted but they may not get the best seats in the house

Can you give a little more info on what this is all about? What do we draw?

Just like @trelemar, I am not clear about it.

-are the drawings supposed to be 6mm x 6mm? Because that’s some nano drawing (I mean, I can probably do a vector drawing that size, but that’s about it

-are they limited to line art only, or can I cross-hatch to add volume?

-are you looking for any particular themes?

Edit: I have re-read it and it makes more sense. So at a scale 6mm x 6mm the minimum line thickness is 0.2mm. I am too tired to doodle today, but will definately scribble something tomorrow. It might be around 20h from now b/c sleep and work, but I will try to upload something.

What themes / feel are you looking for?

Ok full disclosure: there is some empty space and a theme on the PCB silk screen.

The theme is “sketch”, the components are introduced on the pcb itself. It looks a bit like someone made notes in their schoolbook. This gave me an inspiration. I drew doodles of cars, planes, skaters, game characters in my schoolbooks (yep). I thought why not let the community doodle on the Pokitto silkscreen and perhaps on the package as well. Its a way of saying hello world from you all

Space is very limited, doodles will be easier to use if they are emoji-like and compact. The hurry comes from the fact that we would have ordered final pcbs already yesterday but then did some finetuning on component locations.

I reserve the right not to use them if I can’t make them fit / work thematically and you give an irrevocable unlimited license to us to use them free of charge. Otherwise this gets too complicated.

I don’t have any vector drawing software, nor would I know how to use it, but I sent a small pixel-art image, maybe it’s possible?

Doodles are coming in! Keep it going, there’s still time!

pixel art is OK, I can vectorize them

If only I could draw…

Everyone knows how to draw. Teachers who divide people into “artistic” and “not artistic” at school are missing the whole point. Drawing is just another form of information, like speech and written text.

Just take a pen and draw.

Some samplers, this is 2 people 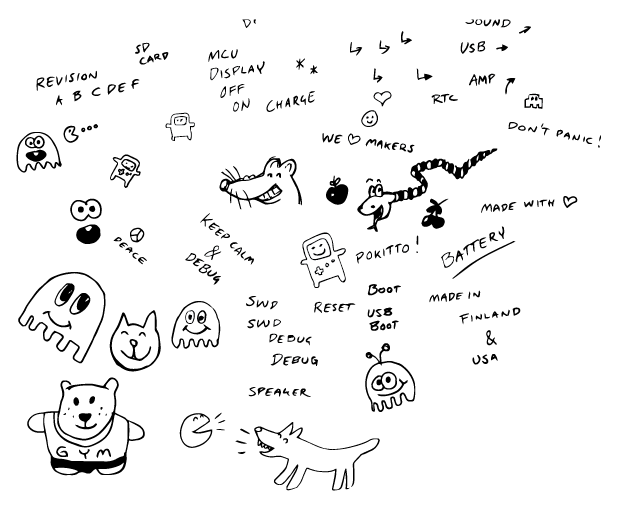 If only I were not at work I could contribute

Those are pretty cool. I will be home in around 2h, and will upload some doodles

Hehehe… its beginning to look really funny! Thanks everyone!

Snapshot from the middle of the board: 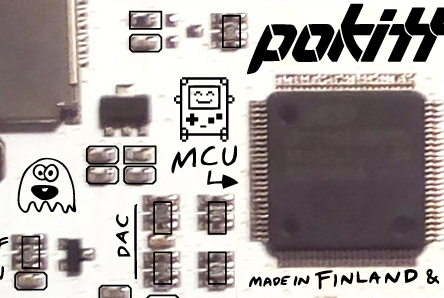 Is this a resistor ladder

Yes. It is a real resistor ladder DAC.

Edit: there is nothing wrong with resistor ladders by the way: it makes a very clean signal.

I love resistor ladders. My first handmade circuit is resistor ladder DAC for Arduino UNO. I know they are beautiful DAC’s. Also it’s educational for who curious about DAC label on Pokitto’s PCB

We spent alot of time debugging the audio circuit and looking at the resistor ladder. We had a terrible bug that was causing distortion in the audio, and I spent months looking for it. The sound was “collapsing” at certain frequencies.

When we finally found it, the reason was embarrassing for me: one of the GPIO’s that was involved in the DAC was not intialized. I was initializing a pin number, that did not exist. But because I use hard coded registers instead of high level API calls, I never noticed it.

The funny thing was, that the bit in question was the 2nd or 3rd least significant bit: by “common logic” it should have not affected the sound so much (because its high up in the ladder and the voltage effect is small). But sound signals are a weird, weird thing. If there were certain frequencies present, it started “eating” the signal until almost nothing came out, regardless of the fact that the more significant “bits” had much more effect on the signal.

For this reason I spent a lot of time looking at the resistor ladder through an oscilloscope. Once we found the wrong bit, the output from the DAC was very clean. No jitter, no cutting, no distortion. A sine wave at 8-bits was as clean as a whistle.

The amplification of the signal though… well thats another horror story for another night.

we have sent the PCB files to the factory They turned out quite interesting. But I am not going to spoil the surprise. At least 5 people got their drawings on the PCB

If you want to keep sending me doodles to use, please do so. I might use them in the printed documentation / box of the Pokitto and ofcourse we will do new revisions of the PCB art later on.

It is also possible that we still need to change something on the PCB (if factory complains) and if I have more doodles at that time I might be able to slip them in.

Thanks to everyone for taking part!

Here is a little notebook doodle like the ones I make in my notes: an innocent and happy pokitto enjoying a balloon of hope (you could place a small component in the balloon.