Im trying to figure some stuff out to learn programming for the Pokitto. However i dont know sh*t about C++

I have been fooling around in this code :

Could someone tell why buttons can only be used if i add Pokitto::Core pokitto; ? Is this not something the #include pokitto.h does already ?

And what should i use for just making it beep? Playtone is not defined according to the mbed compiler. Or do i need another reference for that ?

You mean mygame.buttons.aBtn() does not work?

Pokitto::Core pokitto and Pokitto::Core mygame are the exact same thing. They point to the same object in memory.

A ok, so i removed the pokitto::core mygame and got errors all over.
But this helped, i now understand that the name after pokitto::core is linked. So every command should start with that name.

But what about the sound? Is there something that fits into 1 line to generate a tone or a beep ?

I need to get back to you on the sound, my attention is split among several things at the moment.

You can also do this with ll the different “subsystems”:

Pokitto::Buttons bttn will be pointing inside mygame object structure - in fact it will be the same thing as mygame.buttons! This is a trick you can use to shorten the amount of code you need to write and it does not cost you any extra memory!

But what about the sound? Is there something that fits into 1 line to generate a tone or a beep ?

But, you also need to have these in your My_settings.h

and this in your main.cpp

I tried this, but i dont get a beep. No errors during build. Should be easily to hear ?

I tried exactly same code and settings but cannot get sound. I am confused about that.

Tried with a new project, or adding to an existing project? I think you need to ‘rebuild’ if you change anything in My_settings.h?

I do a rebuild, then if it is succesfull i compile to bin.

I suspect Sound is still on the ToDo list of @jonne

or we need to activate the sound first?

I Suspect Sound is still on the ToDo list of

Well, sound works but I need to make better examples for how to program it.

Well, those are the commands I used for sound in this game, and I can hear it on my Pokitto?

’The Lonely Cottage’ (an old-school Text-Based Multi-Choice Adventure Game). [image] Adapted by me from the source by Wayne K Jones (www.warmcat.uk): How to play: Use Up and Down to move through the possible choices, and then A or B to select. The aim of the game is to escape and make your way home. Good luck! text.bin (56.8 KB)

Honestly, it should not be this complicated to have a simple working ‘Tone’ command though!

aha it does work! but for some reason it is very soft. I could only hear it with a headset and on the max volume.
Using the the speaker of pokitto itself i think i hear something, but im not sure.

Making sure the speaker does work i tried the test animation, and that works good.

edit: could it be the sound volume has to be set in software as well ?

There are ‘hotkeys’ you can use while in-game to adjust the volume (from Pokitto Quick Reference poster): 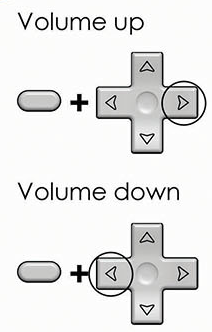 …a little disappointing if I am the only one who was hearing the sound in that game!

…a little disappointing if I am the only one who was hearing the sound in that game!

I will make the sound more user friendly to use

I was aware of this, but even at max volume i cant here it clearily. Perhaps a different tone ?

So even running text.bin from the game page I linked to above you hardly hear the sound at all? Because it works fine on my Pokitto… if that is the case then I would begin to suspect a hardware fault?

No, lets be clear here. The speaker from pokitto is working.
If i use the animation test i can hear the feelgood sound.
However this is not very loud, but perhaps that is just the soundlevel/volume the pokitto can produce.

If i use the text.bin i cannot tell if pokitto is making a sound or not.
Using a headset and setting the volume to max i can here te beep in the game.

So sound is working, but i am expecting it to be a little louder.

And as a extra i have to set the max soundlevel everytime i boot. Since pokitto doesnt make a hearable sound on the lower levels, i have to set this to the max 255. Then after starting the game i set it to higher volume.

OK, a better test might be to run the synth test:

If you set the headphone limit at start-up to anything above 32, then you should get Volume and HWVolume at 255 and hear a nice clear loud sound? 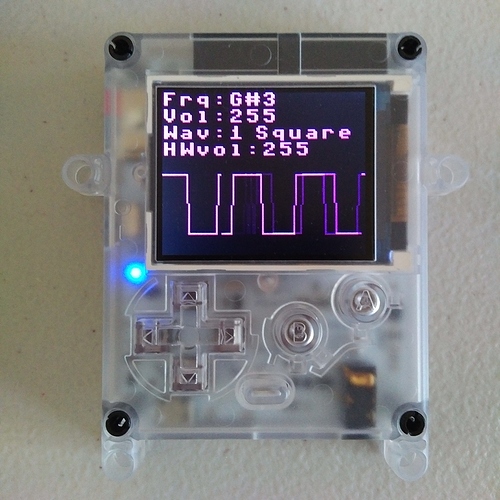 Just tried the synthesizer functions from the Tutorial and it works good. Nice clear sound.

Do any of you hear the sounds in the Text game clearly ?