Hey all! Vampirics let me know that you needed someone to review games for the next pokitto magazine and I would love to throw my hat in the ring. Let me know what you need me to do!

For now you might as well either put the finishing touches on your profile,
or make a thread in the introduce yourself category.

I presume that means we’re on a confirmed 2/4?

As i said before, i made another article, i think i won’t find the time to make a review as well…

Ah, ok, I saw you say you made an article,
I didn’t see you say you wouldn’t have time to do any reviews - fair enough.

It might just be a coincidence, but I wouldn’t be surprised if Famitsu chose to have 4 reviewers specifically because of the (‘shitennou’ - ‘four heavenly monarchs’) in Buddhist tradition.
It’s a common pattern in Japanese media,
most notably seen in Pokemon’s ‘Elite 4’ (literally ‘shitennou’ in the original).

Perhaps Nicole you didn’t look at the format. The reviews per game are very short. A few lines of text and a number

Did i say i love you all guys?

Honestly I myself wouldn’t mind giving the reviews a shot. I’ve been playing games since before I could read. Final Fantasy for the NES is the whole reason I learned to read before starting school. Been experimenting with game development for 17+ years now as well and is the whole entire reason I started learning to program with a good old teach yourself ANSI C 98 (good times were had with bad code when I was but a wee lad).

Just need to know what the final review format decision is then I can put my two cents in for a bunch of games that have been released so far (I’ve played almost all of them so far). Also need to know when the reviews need to be submitted (I would probably type them in a simple text file for simplicity).

Honestly I myself wouldn’t mind giving the reviews a shot

I doubt we’re going to magically have a better artist appear now,
(unless the reviewers want to volunteer to create their own portraits),
so going on the assumption that I’ll be doing the portraits,
can I get a rough guide on how big the portraits should be?

(Preferably in terms of pixels or centimetres.
My scanner can operate at a maximum of 300 dpi if that’s relevant.)

Also, naturally I’m going to need some kind of reference to what I’m supposed to be drawing.

Personally I think the reviewers should be allowed to choose some kind of fictional character to represent themselves if they’d rather.
(Providing it’s an original character of course, or something very generic - being sued wouldn’t be very fun.)
It kind of breaks away from the famitsu homage,
but I can think of a number of valid reasons for prefering it.

Today for practice I doodled @Zockeromi,
so if she approves I could post a scan of that to pass the time.

(I also doodled many many skulls because I couldn’t settle on a style and skulls are strangely difficult.)

Of course i approve (what else could i do)

what else could i do

You could say “I’d rather you didn’t post it because you didn’t ask permission”,
and then I wouldn’t be able to publish it because I’d be bound by my word.

(Bear in mind the only photo I had to go by was the one on the forum with your chin hiding behind the Pokitto magazine volume 1.) 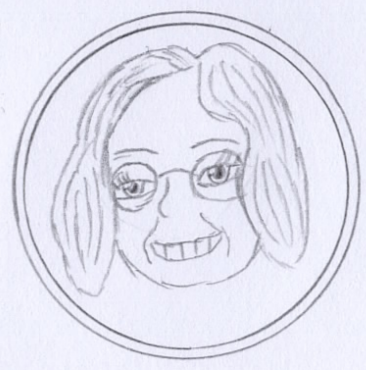 And here’s a selection of my preferred skeletons: 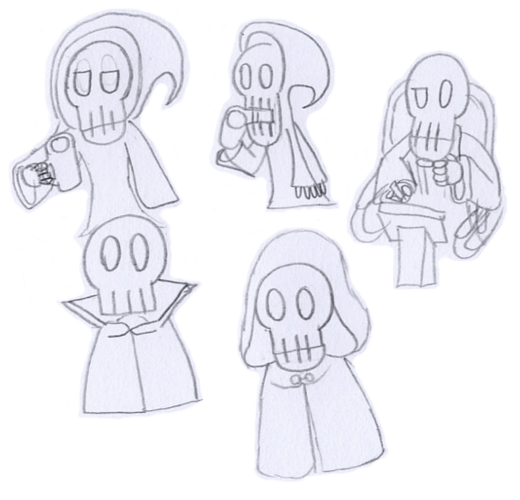 great! Reminds me of someone…

Sent @Pharap a PM with a photo of me and will await the results.

One thought I had for the review section is a brief, “Meet the Reviewers” portion that I’ve seen on occasion in some magazines. It’s usually like a very short interview with some basic questions related to gaming in general with a final question on other interests.

Score wise I always kind of preferred the out of 5 for these reasons:

Score wise I always kind of preferred the out of 5 for these reasons:

I find that rating too harsh, even more for Homebrew games like what we do. Just my opinion though.

Almost reminds me of Grim adventures of Billy and mandy

I find that rating too harsh, even more for Homebrew games like what we do.

This is definitely true. As I’m going through and playing a bunch of games and giving a quick 2-3 sentence review I’m keeping in mind the target audience (usually the developer) as well as the overall budget of these games (which looks to be an average of $15 USD depending on how much coffee was needed).

Most of what I work on is just done to share something decent for free with online friends. And according to my wife, I am giving way too much of my time lol. So harsh review are harder to take in that setting

so a decent margin for rating is welcome I think. So more chances for nuances in reviews if out of 10. But then critique isn’t always easy to deal with but does help people to get better when used correctly.

and will await the results

Unfortunately everyone will have to wait until I can get some feedback on image dimensions.

I don’t mind doing practice runs when I have free time,
but I don’t want to put in effort only to find out I’ve made the images too small.

So more chances for nuances in reviews if out of 10

Almost reminds me of Grim adventures of Billy and mandy

The robe on the two in the top left is indeed the same one Grim wears.

Grim’s a very good incarnation of the grim reaper:
He’s expressive, iconic and an interesting character in his own right.
(Also, all the fanart done in drastically different art styles is both amusing and useful.)

But he also has features I wanted to stay away from (e.g. square jaw, eyebrows) and some I decided I didn’t like the look of (e.g. cheekbones, nose hole, square fingers, three fingers),
hence the skull is quite different (based more on my icon/logo).

His robe is particularly nice though,
I couldn’t resist ripping that off directly (for the sake of a practice run).
I doubt I’ll be able to come up with a better replacement.
(Maybe I’ll ‘borrow’ a robe from an Elder Scrolls game and see who notices. :P)