ok something wierd just happend, after playing the game i left the device on and placed it on the desk.

i heard a wierd buzzing sound and saw the display go black. The game returned for few seconds, again a buzzing sound and black screen. This time the Pokitto stayed like that, and it will not turn on. It seems the battery was drained ? Placing it on charger does light up the led.

Left it on charger until led turned off, but it will not start. I could get it into crp-disable mode but only for few seconds. again the buzz and off.

any ideas ? Not sure if it is the game but this is the second time i had a black screen while playing the game, could this be possible ?

and did notice this :

I've been iteratively developing a Battleship-style game, and on my latest test run the program runs for a few seconds, but then the following appears on the display LOW BATTERY 0mV PLEASE TURN OFF I left the device on the charger overnight, but it still continues to behave like this. I disabled sound in my game but it behaves the same way. Other games from the standard game collection run OK. I'll probably try some experiments in the code to see if I can link it to something there. Do…

but could be something else?

Ok, sounds odd. Make sure the reset button at the back is free to move and is not jammed in any way.

The buzzing sound & black screen was definitely a sign of battery power going out but the other symptoms I have never come across before.

If you connect the USB so that it starts charging do you get a orange charging light?

Edit: I’m not dismissing the possibility that there is an issue on the board. We have shipped close to 500 Pokittos by now (many people bought more than 1) and we have (honestly) had <15 replacements.

How long did you charge it after it turned off?

EDIT: I moved this to its own chain so we do not mess up the Armageddon page

On first try i charged it until the charge led turned off(5 min give or take), but it would not boot then.
I did notice that the charge led is dimly glowing, so it probably is still giving a small charge to battery.
Still charging now… i wil give it a try in few minutes.

Do you know that charging from USB port of a PC is way slower than for example a phone charger?

Do you know that charging from USB port of a PC is way slower than for example a phone charger?

Edit: the max output of the onboard charger is ~500mA. This means its going to take an hour before you’re fully charged

just tried it again, but no go. both as crp-drive or as normal boot. The charge led turns of after 1 min. I think i will have a look inside and measure battery voltage to see if it does get charged.

Ok, strange i charged it several times but never saw a green light. Is it as bright as the orange charge led ?

You can also try to disconnect the LCD. That draws alot of power. If you can get it to go into CRP mode, we know its a power issue

Ok, strange i charged it several times but never saw a green light. Is it as bright as the orange charge led ?

Wait a sec. I need to check something.

No, the yellow led goes out when its ready. This charger is not the same as the previous version (that had the green led). My mistake.

How long have you been charging?

I always charged it untill the yellow led turns off, this is normally after 15 or 20 min. (using the 1A port)

OK @Rakkachi, do this: remove LCD, connect with USB cable to computer, let charge for a couple of minutes and turn on while pressing the flash mode (CRP) key. If you get no connection to PC then thats a first (not kidding) with a battery / charger issue

Just tried, it was alive for few seconds and drive was accesible. Then it dropped power again. 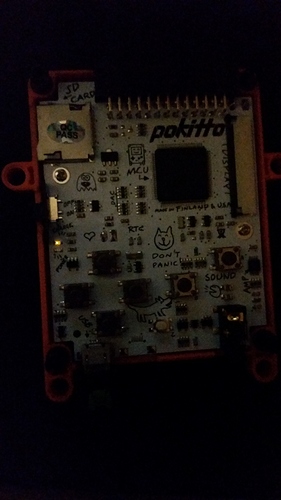 this is the led after about a minute of charging

edit : battery voltage is at 4.2 volts, since it is a 3.7 volt battery this should be enough?

I seriously think your Pokitto is not charging.The reason why you were able to make a connection was because with no LCD, the power needed was so much lower, that whatever was left in the LiPo was enough to make the connection.

I need to talk to Daniel about this, because this would be the first non-charging Pokitto.

Please leave Pokitto charging for a while and see what happens. I will measure the voltage from the terminals with a working Pokitto so you can test it also.

Edit: whoops, I have taken my multimeter home. I’ll be back.

edit : battery voltage is at 4.2 volts, since it is a 3.7 volt battery this should be enough?

Yes, that is actually correct.

Hmmm. So the charger is working

Ok, so i just removed it from the housing and now the pc connection is still on.
The charge light above the on led is stil glowing softly

You know what. I just tested, Pokitto works without a battery (we made some changes to the last version of the charging circuit to allow this).

So even if the battery is completely dead, you should get to CRP_DISABLED state.

I deleted the firmware that was on the Pokitto just to be sure, and going to reassemble it now.

So if i desolder the battery i can still get into the crp state, i will keep that in mind. (no i am not going to do that right away

I am racking my brain thinking about what could be the cause here, because it is so weird.

If you turn the board on, does the blue power led (below the yellow charge led) say anything?