Toying around with the simulator on Jonne´s latest code Pokitto/PokittoSim.

Where do I find what screen mode I am running (and therefore also where to change it)?

How many different screenmodes do I have?

I know this is confusing.

Screenmode setting will be replaced by a simple screenmode number. As in PROJ_SCREENMODE= number. Very soon.

For what it’s worth, I think it might be better to hide the actual number from people, for example:
#define PROJ_SCREENMODE SCREENMODE_LOWRES
(Which I think should also be possible in project properties)

This has several benefits:

Actually that doesnt work. You see, at that point in time (declaring defines through project build options) keywords can not yet have a meaning. so PROJ_SCREENMODE = MODE_HIRES would actually be meaningless.

I am afraid numbers is the way to go here 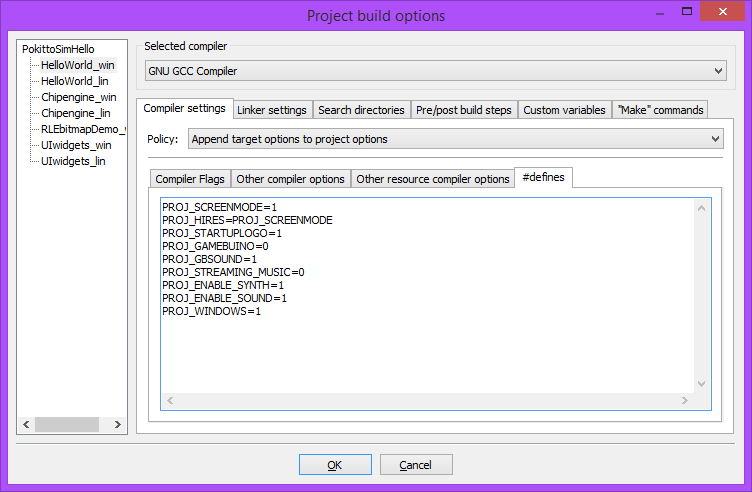 I understand if you still want to stick to bare numbers, but it’s definitely possible to do it this way.

It works both ways actually at the moment

and the end result is the same

But the thing is, there will be many more screenmodes. I already have 220x176@16 colors working and more to come. In that case a simple numeric system (rather than a combination of different settings) is IMHO clearer.

Yes, BUT: 19360 byte buffer. You need to conserve RAM to make the game run. For example Squiddy does not run.

Constraint stimulate creativity!
But you spoke about more screenmodes… you throw the rock now: some leaks?

I will open up the process of how to make more screenmodes, so that the community can make them.

What does a “tiled mode” mean in this case?

“Tiled mode” is a classic from the era of early computers and game arcade machines, when systems had little RAM.

It is an unbuffered mode based on a map of tiles and the idea of a “scanline” as it was in CRT screens.

Tiled rendering is the process of subdividing a computer graphics image by a regular grid in optical space and rendering each section of the grid, or tile, separately. The advantage to this design is that the amount of memory and bandwidth is reduced compared to immediate mode rendering systems that draw the entire frame at once. This has made tile rendering systems particularly common for low-power handheld device use. Tiled rendering is sometimes known as a "sort middle" architecture, because i...

I wonder would a C64 multicolour style mode be worth doing?

It’s probably doable, but I can only imagine it being useful for displaying art considering the drawing modes are chosen at compile time. I guess it depends how fast the drawing code ends up being.

Doesn’t tiled rendering cause visible tearing in the screen where the upper part is from the new frame and the lower part of the screen is from the old frame? Or is there some sort of “vblank” period in LCD where you do tiled mode blitting?

Theoretically it would be possible for the upper part of the buffer to contain new pixels and the lower part to contain old pixels if there wasn’t some sort of system in place to prevent tearing.

You’re actually bang on the money there. I actually haven’t solved the problem of tearing. I just brute force around the issue. Theoretical maximum of the screen blit is ~200 frames per second. I just spend as little time as possible drawing the individual frame.

Is lcd refresh interrupt based or are you just refreshing the lcd synchronously whenever the app gets its drawing done and calls update()?

It is not the best possible solution, for several reasons. In the future, we might add other ways of driving the refresh

Not just half x resolution, but using a 1bpp buffer for the pixels and a second tiled (ish) buffer to add different colours to different regions of the screen.