So I have been lying with Xploritto today, and well I haven’t got around to watching the new stranger things but microsoft released a Windows app the other day that is a Windows 1.1 emulator with some game elements inspired by Stranger Things, and I was thinking a Pokitto “game/app” that looked like windows 1 or even the old Apple lisa of Mac system 6 would be fun, perhaps even give it some OS stuff like PokittOffice a super bare bones word processor, PokittoDraw a etch a sketch mspaint like app, or other silly stuff based on the old operating systems, I count this would go anywhere but it is just an idea anyone can pursue if they are interested,

An OS idea has already been discussed on various levels of seriousness, mostly in the context of @FManga’s new loader, which started to look a little bit like an OS. I would like to see that happen.

In the loader thread we already made mockups of “desktop environments”, e.g. this one that I made: 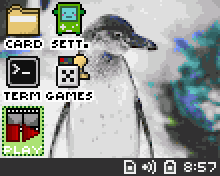 You could of course make a skin that looks like Windows XP or whatever.

I then created PokiPad with the vision of it becoming one of the first programs that would “ship” with the OS, because a text editor is a very basic tool. Also the keyboard module was intended to help create a terminal, which is even a more essential tool. Then I was thinking about creating a basic paint program as well, but haven’t started yet.

I may be wrong, but I think @spinal was working on something like that too.

Yeah, I got bored of it though

. That happens far too often with my projects.