What language are you going to use for the jam?

This will be my first C++ entry

really excited to learn at the rapid pace

As ever, I’m happy to answer people’s C++-related questions if they’re using C++ for their jam entry.

As ever I have a load of C++-specific topics in my resource collection: 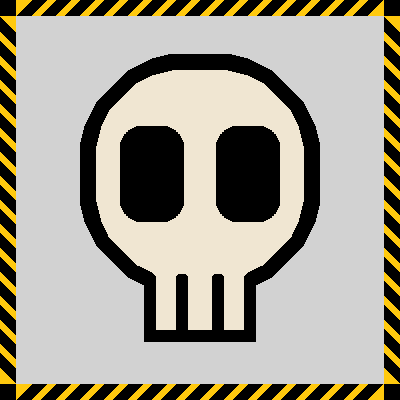 A collection of handy resources, as recommended by Pharap - Pharap/ResourceCollection


(The C++ stuff is in Cpp Resources, and there’s also Programming Resources and Gamedev Resources.)

Also, don’t forget to check cppreference to see if the utilities in the standard library could save you time and effort:
https://en.cppreference.com/w/cpp/header

I’m undecided as to whether I’ll be joining the jam or not.
At the moment my head is full of Haskell and parser combinators.

Which resolution will you choose for the jam entry?

PunkJam is #2 on featured jams on itch jams front page!!

Ah yes, I also volunteered to have my daughter work on judge portraits. If this is already being done (I think @Pharap mentioned he couldn’t do it for this jam?), please let me know.

Otherwise, I will need either a representative picture (doesn’t actually have to be you), or a description of what you’d like your portrait to be. This was the reference style provided (the 4 chibi characters), but ultimately the portrait styles are at the capricious whims of my teenage daughter.

From what I could gather from this thread, the judges are currently:

If there are mistakes or anything missing, please let me know! Thanks!

Should hopefully be able to work with my profile pic but if you need a better image just let me know. My only request is I get to keep my wizard hat that @Pharap gave me. In a PM after he added it I confirmed that I actually dress up as Gandalf every year for Halloween so it was a perfect addition.

I do like that wizards hat he gave me

Thank you @Pharap for your efforts, but now I guess its someone else’s turn to draw my fugly mugly

The jam is about to end. We have had a lot of discussion on the Discord channel about how we have had a bad habit of extending jam deadlines to the point where they have become meaningless.

So we shall not do that this time.

HOWEVER, it seems we have at least a couple of entries (mine included) that are close to missing the deadline / entries that will be badly affected by the rush to meet the deadline.

I have to balance the health of the Pokitto community vs. strictly sticking by rules. Considering how much effort has been put into the jam so far (including work done on TAS, Femto and organizing the jam itself), then if we get 4 + some half-baked / kneecapped entries, then I am going to be really sad.

In football, there is the concept of “stoppage time”, which means that the referee makes a judgement on how much of the 90 minutes of the game was actually active play time and how much was used for stoppage (fouls and discussions, interruptions). On championship level, in 2018, stoppage time was on average 5.3 minutes. So game time was extended to 95.3 minutes on average.

Considering that we have had several revisions of tools (Femto, TAS and TASUI) during the jam, I am of the opinion that “stoppage time” would apply in this case.

And, using the same average of 5.3 minutes, that would mean in the context of jam, aprroximately 1.8 days. This would mean that with stoppage time, the jam would end on sunday, giving many (including myself) that vital weekend time to get our crap into presentable form. Those who have worked on their entries with friday in mind would not be unnecessarily disadvantaged, because 2 days will not change the world, but those who are on the verge of making it, will possibly have something to submit to the jam.

A tough one for me. Sure I’d want to see as many entries as possible, however, using the above analogy. How many peoples entries were directly effected by the pokittolib/tas/femto updates during the jam period and was it enough to prevent them from working on those entries? If those people make up more than 50% then sure, but if only 3 entries are effected and others are just late because real life got in the way then I am less happy for the extension.

For the record, I voted ‘no’ but I don’t even have an entry. I just think extensions need to be thought of a number of days / a week before the deadline to be fair on everyone.

@filmote I believe in thinking aloud. What we have inside of us will come out regardless of whether we try to hide it or not. Because of that I really appreciate your honesty.

Me asking the community questions like this is also me messaging everyone, that I have no wisdom above anyone else. I am on par with everyone else.

At the moment, I feel that there is no fair way to extend the jam and that long term we (especially myself) need to start thinking about jam deadlines earlier.

As it stands, I see no grounds for any extensions. Its a gut feeling that “this is the right thing to do”.

12 hours to go, good luck everyone

You can still submit (if you wish) but you can’t win. Your game may still be featured on livestream and pokitto mag #2

I will help the judges start their work tomorrow.

Because of that I really appreciate your honesty.

If I was struggling to finish an entry I might have been less transparent!

Ok regulars and others!! What happened? Why did you not submit?

My entry got stuck because…

Personally, Cyberpunk was too close to my heart. My expectations for my own entry were wayyyyyy above what I could achieve in any case.

I marked that I didn’t start one because technically I did but it was so incredibly last minute concept (only a few days left in the jam) that I wasn’t actually planning on it being a viable entry. Not starting one though was by choice and not due to difficulty with them or TAS.

I wanted to participate too, but things got in the way and life was especially hectic for me the final week of the jam, right when I had been hoping to make a last-minute entry. I never could settle on an idea I was willing to invest time into, and when I did have free time in the last month I wanted to work on other projects I already had in progress.

I did like the theme, but it led me to some larger, more ambitious game ideas, and I didn’t want to add an ambitious project on top of what I’m already working on.