(Meow - Charlotte and the 64 meowers)

Here is my second finished game after TAZS. (and it’s still not a c++ game, sigh)

It’s a very simple platform game made in Pine2K, grown out of a few experiments.

You can download the release version here:
miaou.zip (51.6 KB)

Almost 99% of the gameplay is demoed in this GIF. 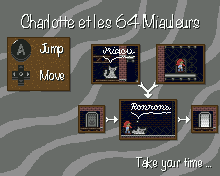 Everything below is a copy of the readme.md file inside the archive

Charlotte was walking back to her home.

That day, she decided to take a shortcut through the old industrial area.

It’s a district with a lot of abandoned buildings, made mostly out of bricks, devoid of life.
… or so she thought.

She heard a lot of meowing inside an old factory. Cats kept calling her.
After a short passage through the pet store, She decided to enter the factory. Well-prepared.

But the old factories aren’t exactly a safe place…

Each level will features the following elements:

A timer is launched when you first move your character in Level 1.
When you’re through the Level 10, you’ll have a summary about your times, collected catnips - and the resulting score.

Falling in a pit will not reset the current level’s timer!

Woohoo! This is a great platformer! And another one I can expect to be challenged on by @tuxinator2009 I’m sure

Thanks for letting me play this early!

It’s the french equivalent of “purrs” (as a noun, plural form)

sorry about that!
I did want to add such a feature but I really ran out of progmem

It’s the kind of things that makes me want to port the game to c++, because it’s missing a couple of things (a timer, the current level number and a death/fall counter would be nice to have as well)

(by the way I started porting it to C++ today, as an exercise)