This is my game Operation Fox that I was working on on the Gamebuino.

In order to know what 16 colors is really capable of showing, I made this test image.

This was before I started working on the Pokitto. I was sure 16 colors is enough! (especially when you can choose the palette)

People might think I am making Pokitto in order to make money. That’s not it.

It started and still is about my desire to make a fun, simple gaming gadget that is enjoyable to program, the way that old game systems were. With Pokitto, I am building a sandbox and inviting people to play on it.

For reference, this is the original game on Gamebuino… its difficult to see what is what.

I can’t wait to get to work with you all on cool game ideas!

are you going to upgrade this game to the 110x88 resolution?

This game is not a priority at the moment. Its too “violent” for my new kid-friendly image

I will be releasing “Pixonia” first, its a complete game already. Next will be a game called Super Afrokarts, which is a 2-player Mario Kart Game. I already have this running also, but I need to optimize it. 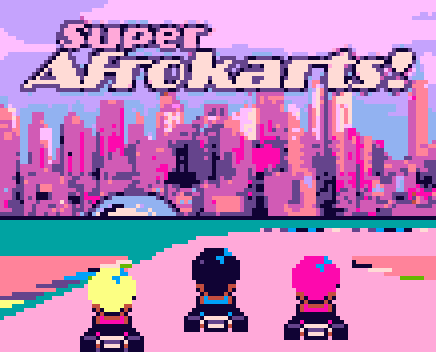 Super Afrokarts, which is a 2-player Mario Kart Game

wow what? is this some mode7 stuff? i dint even consider doing anything with pixel manipulation

Texture mapping. I will make you a video tomorrow. The reason why it is so slow is that divisions are not fast on a Cortex-m0 and you need 1 division per pixel. I still have not gotten around to making a look-up table for the divisions.

LOL no no no it’s not. But seriously it looks gorgeous when you can choose the palette. I’d rather have the kids play cartoon violence on a game system and learn to code than get desensitized watching real violence on tv.

It would be fantastic if Operation Fox and Super Afrokarts be somehow ‘accidently’ leaked onto some super secret location? Somewhere where those who might find them too violent or offensive will not find them, and others who grew up in a less sensitive world can download them and still have some fun. Just saying…

The reason why it is so slow is that divisions are not fast on a Cortex-m0 and you need 1 division per pixel.

I’m sure you already know about the good old multiplication-by-the-inverse hack.