Not just another portable emulator engine 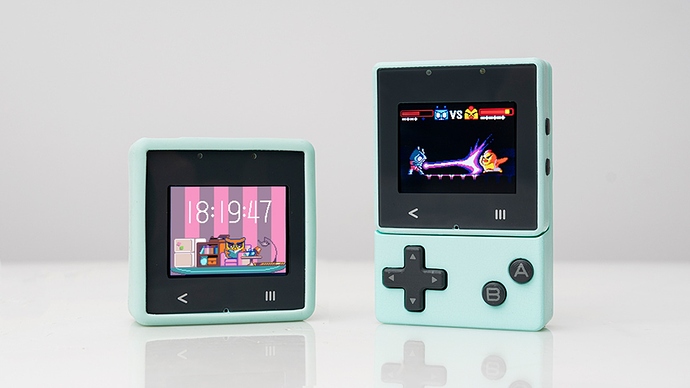 Modularity makes this interesting! Thought the price is a bit high.

At first I thought it wasn’t anything particularly special,
but that rotating screen is a really nice idea,
and it’s nice to see a device with an actual link cable.

The physical capabilities of this device certainly make it stand out from similar devices (e.g. Adafruit’s circuitpython thing), and make it better value for money.

We definitely need to try doing some 2-way linking over the Pokitto’s PEX sometime.
Linking pins should be easy enough, it’s devising a suitable transfer protocol and the timing/synchronisation that would be difficult.

I’m also reasonably convinced we could do a block programming system, but it would be a fair bit of effort.
The easiest way would probably be to tailor an existing block system to generate Pine2K code.
It might be possible to generate C++ code but I expect it would be a bit finnicky and I get the impression these block systems don’t play well with statically typed languages.
It’s either that or try to get Lua working and just use Blockly’s Lua output.

I’m also reasonably convinced we could do a block programming system, but it would be a fair bit of effort.

Some work has already been done and proof-of-concepts were made (both generating Python and C++ with FixedPoints). Making it useful was going to be a significant effort and there doesn’t seem to be any interest in actually programming with blocks, so it was dropped.

Kind of reminds me of the M5 stack faces kit.

but that rotating screen is a really nice idea,

I like the idea of the rotating screen also. great for some vertical smups

It’s kind of similar to Adafruits PyBadge but without the gameboy style enclosure.

I backed this after seeing this thread. Looks interesting enough and a super early bird got available, from someone canceling I guess. First thing I have backed ever