What do you thing about have more goal about upgrading the pokitto hardware ?

What do you hope for that

i kinda think the hardware has been settled adding more means the prices of product rise
also they have been working on this for a some time, i don’t know if it got bigger ones in the product line that has the same io and package

Memory&storage is inside the chip, and we can’t increase it easily.

But who knows what the future may bring?!?

How about an external hardware device on the GPOI? Say an HDMI port or some kind of video output option?

Memory&storage is inside the chip, and we can’t increase it easily.

But who knows what the future may bring?!?

the big win for Pokitto is the exposed headers on top, so many things that can be done! RAM packs ala the old ZX81/Spectrum, VGA out, Controllers of all sorts, a whole ecosystem of makers making stuff to extend Pokitto… who knows what the future may bring, indeed!

What about a Big Pokitto, a new version of Pokitto with bigger and better chip/memory/display? So we can choose to buy the tiny and the big boy!

External hardware is a great market for physical computing with LED, button, buzzer or else.
Look at the accessories for Raspberry Pi and BBC microbit.

I plan to control LEGO motor and sensor.

And I will try to connect the various Pi accessories I have by mapping between Pokitto connector and Raspberry Pi connector. The lack of 5V might be an issue, but many things should work.

I plan to control LEGO motor and sensor.

Can you but those cat looking conectors anywhere?
You can add a batery and use chips that isolate to make the gpio 5v compliment

I plan to connect LEGO power function by cutting this kind of cable: https://shop.lego.com/en-CA/LEGO-Power-Functions-Extension-Wire-8886

They are backwards compatible with old RCX motor and accessories.

One one side I need a connector for the Pokitto (at first sight old PC disk drive) on the other side I need those connector (for output motor and power input) in between some motor driver.

I believe the motor driver is controlled by 3V GPIO, The power for the motors is separated and can be higher.

oh i see, lol i thought they only used the phonecable looking ones these days
are you going to try and split the cable or disasamble the connector itself? you could hotglue that in some way

if you got one you could 3d print this it seems

I went to the LEGO store and acquired a few of those cable. I plan to cut them in two to reuse the connectors.

So the idea is to build LEGO robotics using power function: https://shop.lego.com/en-FI/search/power%20function
At least for the motor, this is might cost less than (and easier to drive than) Mindstorm motor.
It is also compatible with old motor like the one from Mindstorm RCX (v1.0 and v1.5) or even light brick from the past.

I don’t have the more recent Mindstorm NXT or EV3 https://shop.lego.com/en-FI/search/Mindstorm that use those phone like (but not exactly) connector. If you want to control those, I believe it is an I2C bus, at least for sensor.

i see neat, i hope you document everything your going to do

What about a Big Pokitto, a new version of Pokitto with bigger and better chip/memory/display? So we can choose to buy the tiny and the big boy!

The Pokito is the Big Boy. The little one is my Arduboy. I understand there’s some form of Arduboy compatibility in the works. The question is will it replace the Arduboy in my pocket? Mostly, it’s a matter of size… 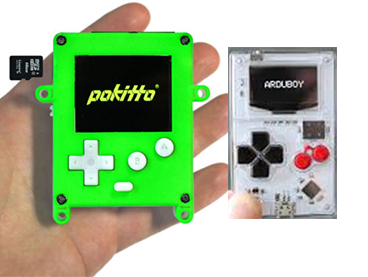 Your picture doesn’t give any comparison of thickness

The Arduboy is credit card size and so can be squeezed into a wallet. Can a Pokitto?

urg, i dont have lego on hand, but its like 1,60 cm adding buttons its like 2cm probably
arduboy is 0,56 cm i just checked

There’s also the convenience factor. The Arduboy I can plug into my phone and change games on. That should come with the Pokitto, or maybe we’ll get a way to store multiple games on it, but if I need access to something I don’t normally carry to change games, it’s less desirable.

There’s also durability. I was more worried about my phone than the arduboy when they’re in the same pocket, and after my mom ran hers through the washer, I don’t worry about putting my arduoy in a pocket with my keys. The Pokitto looks a bit more fragile - especially those tabs!

Makes me think the Pokitto is more something I’d throw into a bag or the like if I were taking one than just leave in my pocket all the time. Especially if it gets expansion gadgets, which the Arduboy doesn’t really have available.

Pokitto measurements come from Lego. It is exactly 2 technics lego high, 10 technics holes wide and 11 high. The benefit of this is that when I made the multiplayer snake game, I could make a stand for the console and snap it on in 2 minutes 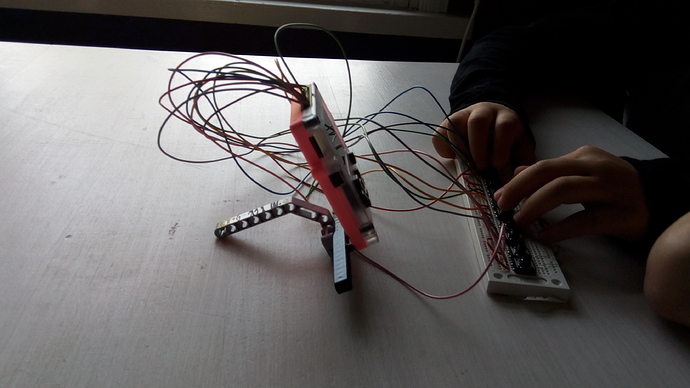 If you want to try how the size feels in your hand/pocket take a pack of cards. the volume is almost identical 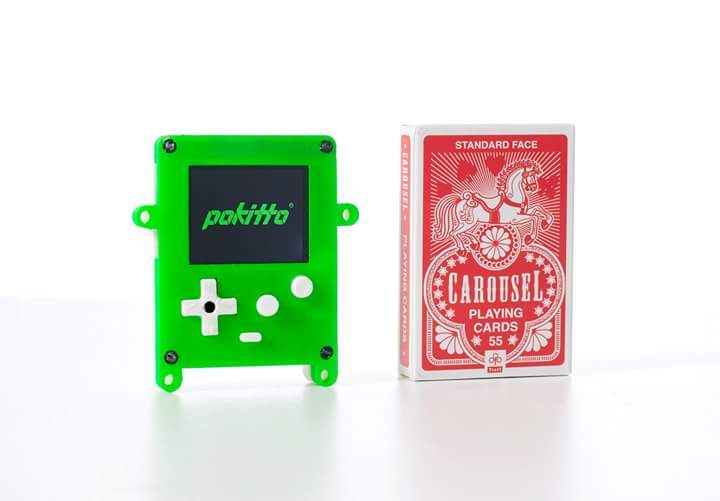 thats a european pack of cards, not poker cards (just so people know, that stuff isnt worldwide, i think)
but thats basicly a similar size as an arduboy since i keep mine in a card deck pack XD

You know, we have standards for measuring things. It’s called the Metric System. Or, as an alternative the Imperial System can also be used.