Hi everyone! After the release of my Arcade Classics game, I decided to start on a little sandbox game (sorta like Minicraft).
I’ve started on the textures, but can’t decide whether to go for 8x8 or 16x16 sprites.
Here are some mockups of scenes using both sizes:
16x16:

8x8 is a closer fit to the Pokitto screen size, and it shows a bigger range, but 16x16 might be easier to see on the game screen, and has more room for a status bar…

What do you all think? Here’s a little poll: [poll type=regular public=false]

3 Likes
Pokkito Game Index (list of games)
Looking for artists for PokittoCraft
Pokitto is on the way, what games should I make?
Blockitto Development Thread
Suggest a game to do next (a.k.a. Game idea Survivor island, ep. 1)?
epicdude312 August 28, 2017, 2:43am #2

It’s been a virtually universal decision that 16x16 tiles will be better, which I agree with. Only 2 people chose 8x8, out of 11 (counting me, my sister, and my mom as well as the poll results), so I’ll be going with 16x16.
I’ve updated my mockup with a much less jarring tree leaf texture:

Anyway, sometime within the next week, I’ll start work on the engine itself.

Also, a little note: I’ve realized that white and yellow flowers look like cotton and corn, respectively. I might change the textures to be a bit more “flowery.”

I’m still trying to get directBitmap() working, but in the meantime, I made some new mockups:
Garden idea with stone wall:

Please tell me how bad these look. I need to get them to look good, because they’ll be used a lot in the game…

I decided to make an “extended mockup” based off of all my previous mockups, because I couldn’t figure out directBitmap().
Because of this, I made a concept for possibly having crops in the future. So far, all the crops I came up with match with the colors of the flowers.
Here’s the mockup:

Oh, and I also added birch trees, because I had a little extra room in the palette. You can see a rough birch forest in the bottom left corner.

As always, feel free to let me know what you think!

I made some good progress today!

First of all, I made a couple new 10x10 block mockups. One of them shows a possible water idea…I don’t think I like it, so I’ll have to think of something else… 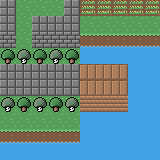 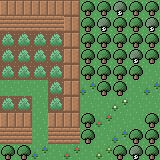 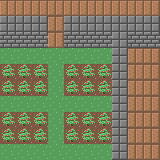 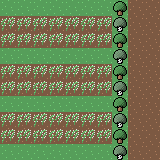 Also, I managed to finally get directBitmap() working! Here’s the game running in the simulator: 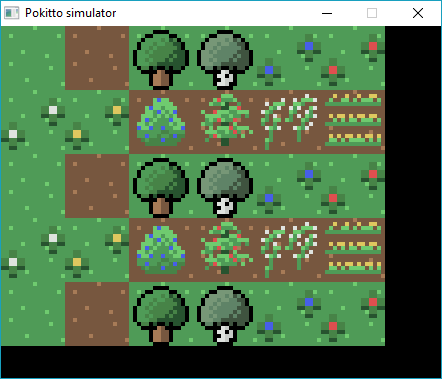 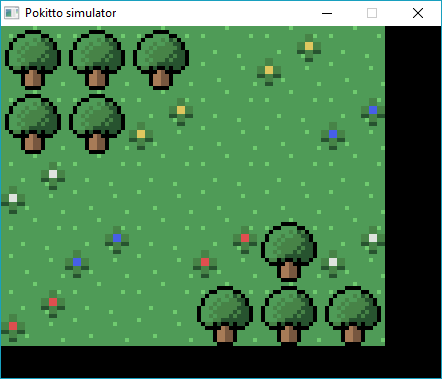 I’ll try and get more done over the weekend. Might even get to adding the player!

Also this pokitto craft would be my main go to game for some time.

Don’t worry about voting! I probably would have gone with 16x16 anyway. Glad to hear that you like what I’m doing

looks really nice, like it already. Do you have a name for it ?

I really haven’t come up with a name for it. I’d like to wait to get further into development so I can decide what the game’s “identity” will be.

When I get to that point, I’ll probably make a forum post with a poll here…

It looks great, I cannot wait to get a pokitto and play it.

I managed to get world generation working! I also implemented a rudimentary form of scrolling to test it out, but this type of scrolling won’t work with block editing, so I’ll have to use a different method.

Here’s a GIF of me scrolling through the map. I made different biomes for plains, forests, birch forests, and flower forests. I don’t think I found any flower forests when flying around, though…

Also, something else, that doesn’t scroll:

You may be thinking, “This is exactly what you did before!” And it gives the same output as before. However, now it’s using classes, so it can be used to add block editing, and is much more modular than before.

UPDATE: I got my previous world generation working with the new class format. I also got scrolling working (it’s quite simple if you know how it works), but now I’m having an FPS problem. I don’t have time to fix it today, but I know how…the game’s drawing blocks offscreen, so I can just not draw them.

Okay, I added a player sprite in the middle of the screen:

What I need to do:

Also, now that there’s a player, you can kind of get the theme I’m going for. I think it’s finally time to name the game. Here’s a poll for it:

And finally, I added the player to some of my old mockups. I also had a “checkerboard” idea for walls, to show that they are walls and not floors.

I added the side animations:

As is also apparent in the latter half of the GIF, I also added block editing! You can press C to switch to the block selector and change the block you have out. You can also press A to place said block.

Next up: collision detection!

Pokitto craft, to make people realize what it’s for.

Today I added back the smaller-sized window: 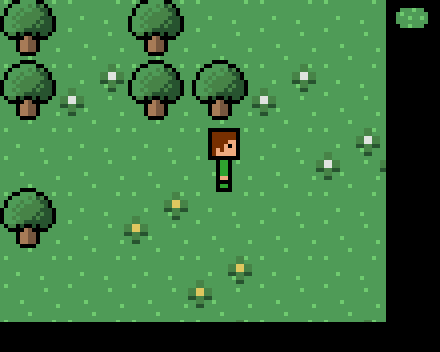 This was actually really easy to implement; I just made a new function that was the same as directBitmap(), but didn’t draw pixels past a certain point. Blocks use this function, while everything else uses ordinary directBitmap().

I also updated my mockups to add a GUI idea:

I’ll hopefully get around to adding collision detection tomorrow.

I don’t see a difference

One gray color is changed to brown, 2 brown colors are taken away, brown is used instead of dark read for the hearts, and the birch tree is kinda ugly now.

All in all, I think I can deal with the flashing; it’s been greatly reduced by the new draw block function I created, and if I remember correctly, @jonne mentioned somewhere that he was trying to fix it. It shouldn’t be a problem soon

Also, I really use the stuck out tongue emoji too much

I don see a difference either, and since we are looking at it on a HD screen i am geussing that on the Pokitto there is no difference at all.

My point is that if you want fast flicker free graphics , you need a screen buffer.

DirectPixel will flicker because you are drawing stuff on top of each other on screen not in the privacy of the screen buffer. Its like undressing yourself on the aisle in the department store instead of the changing room - someone will notice