Should you have a home at the top of the stairs? I know the original had also a part going left or right so it didn’t need a hole, bit if the stairs are this way it may need a hole in the floor above. What do you think?

If mixed mode is available you don’t even have to decide!

if the stairs are this way it may need a hole in the floor above. What do you think?

This thought crossed my mind as well.

If the stairs are a bit of an issue, it would be easy enough to use a lift.
A lift would essentially be like a magic vanishing cabinet.

link corrected.
Basically it allows
220x176x4
110x176x16
110x88x256
All at the same time. The screen can is split into 88 lines, each line can have a different ‘mode’. This is possible because all of these modes use the same buffer size, so the only real difference is how the data is transferred to the screen. An advantage here, would be to swap from low-res 8bit gfx to hi-res 2bit (for text as an example) within the same program.

To let you know they would have a message in the top of the screen.

The 220x resolution would be best, speed doesn’t really seem an issue for the game.

In that case, make sure you’re sticking to the same 16 colours for your images.

Ok, so I sampled everything and compared the hex codes, and I don’t know how I did it but after a slight modification I have exactly 16 colors now. 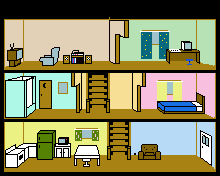 and all the colors in Jenny are reused from the house.

Actually as I look at it I think perhaps the black area could be used to show the food water attention extent stat bars in a color but unlabeled.

So I read that folks were not sure what the game would be like, basically it’s like a tamagotchi but in color with an actual house for the “pet” to live in initiall it is just a virtual pet you start the game and the house loads and a little person moves in, you use the c button to “save” and exit the game the d pad has 4 functions such as give food, give water etc for additional functions you press a or b and a direction, eventually the select/programmer button could be implemented for some thing as well.
The little person can interact with you directly by asking for stuff or asking simple questions answered with a or b they can play games with you as they are implemented simple ones like blackjack etc they can listen to records, play video games use their computer etc. you provide food water new books games and records and companionship for them, if they are down you can pat them in the back or call them on the phone.

LCP would be awesome. Even it`s not really a game, I liked it very much

Yup, I tried real hard to convince people to work on this but nobody ended up working on it…

If you’re curious about this “game”, you can play it on the Internet Archive:

And here’s some info on how to play the C64 version…
https://www.c64-wiki.com/wiki/Little_Computer_People

Btw: Be careful with those keyboard shortcuts…

CTRL W (Water) The watertank will be filled up a little.

nobody ended up working on it…

I actually did start writing something.
I wrote a load of boilerplate for a decision tree system, but I didn’t get any further than that because I wasn’t really sure what the mechanics are supposed to be like.

I’ve just been having a quick look at some videos of people running it,
and the thing that struck me the most is how many different animations there are.
The animation system must be incredibly complex.

If you’re curious about this “game”, you can play it on the Internet Archive

For some reason it wouldn’t run on my regular browser (Firefox),
I had to use my backup (Chrome).

I’ve been sitting watching the man and his dog walkaround the screen for several minutes,
but I’m still none the wiser as to what I’m supposed to do.
I’ve tried typing things but nothing I type seems to affect the world in any way.

The C64 is not the best version to use for this game because of the keyboard inputs.
Better have a look at “Apple town story”. That´s LCP for the Famicom/NES. It was made for Joypad-only gaming.

Maybe we can find a (engl.) manual for this.

I ran into this game earlier when trying to find out information about playing LCP.

In case you’re wondering what she says in the speech bubble after the intro:

I am Cathy. Pleased to meet you!

Translator’s note:
The actual meaning of ‘yoroshiku ne’ is more like ‘please treat me kindly’, but that would sound odd in English and it’s often used when meeting someone for the first time in the same way other languages would use “pleased to meet you”.
Additionally the ‘ne’ part makes the statement softer/gentler, so it doesn’t sound too assertive.

In the most basic sense of game, it’s a virtual pet / the sims in 8bit