Very little, I read when I can (single dad syndrome lol we have less life than undead).
And to tell the truth I agree that I should work on something smaller, been thinking about it too, but I Really want to see this project get going and I’ll do the art if someone wants to work on it I need to finish the prototype house tonight

Perhaps you should consider just taking a backseat and letting others do the programming?
It depends what matters to you more, learning to program or the game getting implemented.

If you want to focus on learning how to program, I really think putting this project on hold and starting with something easier would be a better option.

I’m not saying that to be harsh, I’m saying that to be kind.
This kind of project is relatively complex for someone who already knows a lot about programming,
so if you try to tackle it while you’re still just starting out then you’re going to struggle with it,
and I really don’t want that to put you off learning how to program.
Basically, it’s a good project, it’s not just a good project for a beginner to face as their first project.

If you’re happy to just be doing art and game design and not touching the programming then me, @drummyfish or a some combination of people could probably handle the programming aspect (time and other projects permitting).

Also how many frames of animation does the character absolutely Need ? Walking climbing stairs doing stuff.

I am more than happy to let the sages weave the magic code for this, I can learn on other projects, I loved lcp years ago, and more recently when I got to play it again on my pocket chip until the platform died, I want to see it resurected for others to Enjoy. Just being associated with the project Is awesome to me.

I’m seriously thinking I can make a personal project out of a pitfall like game, just a dude running in the jungle to begin with.

I can’t program, my project data structure (something between a queue, a stack and random access array) is full

we have less life than undead

Ok, to save on the animation, I modified teh doors 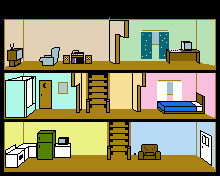 and a mockup of the LCP to scale

Are we supposed to have a kitchen table? Seems weird to not have one to me.

Oh and great job so far on the graphics!

I could possibly find some time to donate some code to kickstart the project,
but I’d need design documentation to know what everything is supposed to do/how the people are supposed to behave.

something between a queue, a stack and random access array 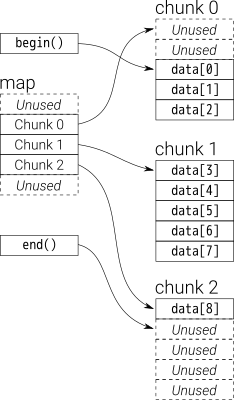 (Image stolen from this SO answer.)

I’m seriously thinking I can make a personal project out of a pitfall like game, just a dude running in the jungle to begin with.

As always, if there’s anything you don’t understand, ask away.
(Even if the question is “halp, the compiler is giving me big scary errors, how do I fix my code?”.)
No question is too small.

Working on that , not sure how I want it to look

I will work on that ASAP, I have the next two days off finally

Also I will write them out and take pics asap

just a mockup of a pokitto lady

Very cool, you’ve already got some nice skill in graphics. I liked the faceless stick figure above a lot. The lady is good too, but she’d need some kind of contours, because against some walls she becomes transparent due to the limited palette.

True, I honestly think that a stick person may be better, sure you can get more emotionally invested in the human like figure but she’s so small she cannot have an outline and like you said invisible lady.

But with the contours it’s not that bad, it fits the style of the furniture etc.: 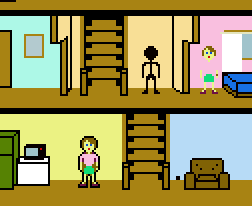 I personally think this Little Computer People is a great idea and the sketches so far look fantastic.

It would be really cool if the little people would go on a computer and you could play a minigame!

You know what this reminds me of? This:

It’s just a 1 pixel border around her right?

Here is the initial flowchart 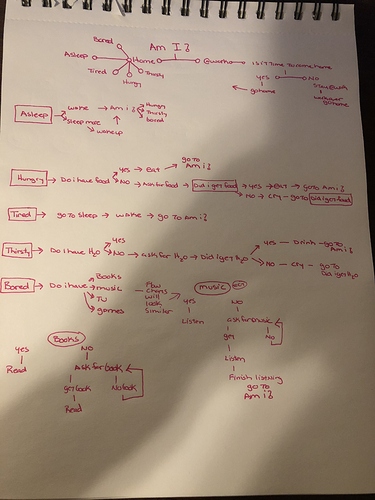 The work side is not necessary atm just a place holder for an idea.

initially I am just going to make the male and female have one outfit, until I get better at animating them, I think three frames can cover walking, and going up and down stairs can be just two repeated,

also I left out a part of the chart for thirsty, using the potty,

1,2,3,4,1,5,6,4
pattern for walking
I get the feeling Jenny will be the initial character, lol
I still need to animate her arms , and then up stairs walk,
and the other park of the walk,

so far this is upstairs, just this then flipped, back and forth,
for upstairs, her head will be seen from behind,

and sitting in the chair downstairs

for teh computer desk, I just need to modify it a bit, so you see her from behind 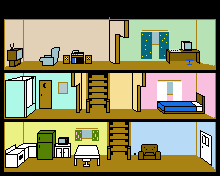 current house next it will get some artwork perhaps a clock.
I ned to make the bathroom door open the other way, and make open and closed images for the doors and fridge.