How to play sounds?

This is awkward but I don’t really know how to play sounds and haven’t found satisfactory documentation on these forums. I could figure it out, but being lazy and having no comfortable HW testing set up I figured it could also be good to have this publicly answered in a stack overflow style, also for others.

What I need is a typical scenario: continuously play 8bit sound from a circular buffer at specified rate (8 kHz). Could some knowledgeable person here please post a super simple snippet that does this, along with what I should put in my_settings.h etc.? Thank you very much

Here’s the solution (based on @spinal’s code), thanks to everyone:

Probably not an answer, but here’s a related thread:

How to add sound? Tutorials & requests

Hey everyone – I’ve been trying to figure out how I might add simple sound effects, and no matter how hard I try, I can’t seem to get even single notes to work. My game feels awfully quiet. Can someone please explain the playTone and playNote functions to me? The API docs don’t really help much when it comes to these…

How do track and patterns work? Music and Sound

sound api is very undocumented and i really have no clue what anything is im assuming track and pattern need a array of some sort of structured uint16_t data but i cant make out what the format is. all i get is some static noise im trying to playback sound from flash not sd

From the work I did on my tracker music player and more recently with FM radio hat, I can say that sound on pokitto is both simple and tricky to figure out for a non-audio person like myself to grasp.
I’m not at my computer right now, but if there’s an example of my music player on the forum somewhere it might help with mixing samples together as well as playing different sample rates at the same time. There is a little code in pokitto lib for using my player in hwsound.c or somewhere like that that I used to mix multiple samples together, that might help.

Does this answer your question?

Does this answer your question?

Maybe, it seems a bit rough around the edges, does it actually work? I’d like to edit it a little bit and then put it into my post as an answer. Unfortunately I don’t have Pokitto with me to test. I have a few questions and notes:

Maybe, it seems a bit rough around the edges, does it actually work?

What are buffers , currentBuffer , currentPtr , BUFFER_SIZE etc.? I don’t see these declared anywhere. Are they internal Pokttolib things?

Correct, those are all variables in Pokittolib and used by audio routines.

Why do you need multiple buffers?

I don’t, but Pokittolib reserves 4 buffers when you define PROJ_STREAMING_MUSIC.

True. I just prefer not to use division or modulo.

How is this?
Settings.h should have sound disabled for this to work well as it uses the same timer setup (stolen from pokittolib).

I don’t, but Pokittolib reserves 4 buffers when you define PROJ_STREAMING_MUSIC.

Why does the library do that? I can’t see a reason.

I still think the program doesn’t work the way you intended because of the if condition in the main loop that is only ever true once.

That looks pretty nice and simple actually, it may be what I am looking for but I’ll have to study it a bit.

Why does the library do that? I can’t see a reason.

It was optimized for PetitFS. The buffers were the same size as the SD reading buffers.

I still think the program doesn’t work the way you intended because of the if condition in the main loop that is only ever true once.

I’ve used it before. The currentBuffer in the if condition is one of the Pokittolib internal variables and it’s updated in pokSoundIRQ().

Cool, I hadn’t thought about replacing sound entirely while keeping everything else.

Don’t you need to define your own dac_write() and ‘manually’ enable DAC if sound is disabled from my_settings.h? At least I get errors about it when compiling.

You can simplify timer initialization a little if you use extern "C" void TIMER32_0_IRQHandler() for timer IRQs, because then you don’t need to change NVIC.

Don’t you need to define your own dac_write() and ‘manually’ enable DAC if sound is disabled from my_settings.h? At least I get errors about it when compiling.

I don’t know. It seems to work fine for me. I’ll double check my settings when I get a chance.

[edit]
My_settings.h in my project is all commented out. 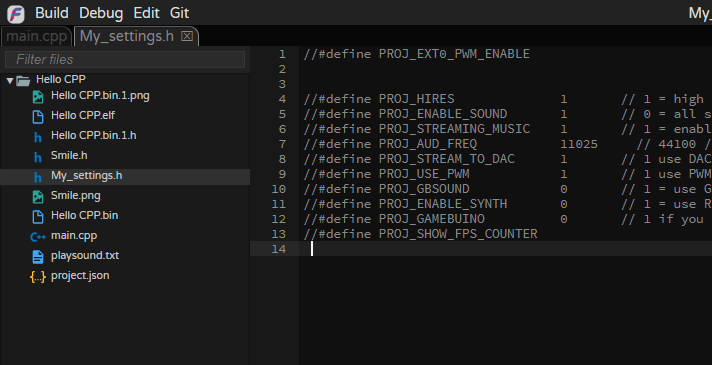 I do get some redefinition errors, but nothing that prevents it compiling.

Sound is enabled by default, so just commenting it out doesn’t disable sound. There is this in Pokittolib’s Pokitto_settings.h:

You need to #define PROJ_ENABLE_SOUND 0 to actually disable it.

I stand corrected. I which case, yes, you need the sound enabled:-)

These are all pretty hacky ways of playing sounds though, shame there isn’t a nice API for that, especially when sound is pretty important in games. It could be as simple as a single function playSound(char *sound, int length). I still don’t get why three buffers are used and why sound code is mixed with file system code.

Anyway, as soon as I get home I’ll test your solutions and will try to reduce them into a bare minimum snippet which I will post.

It could be as simple as a single function playSound(char *sound, int length)

If that’s what you want, it exists:
PokittoSound::playSFX( const uint8_t *sfx, uint32_t length )

Amazing, that could conclude the thread, however by looking at the source the function doesn’t mix multiple SFXs, which is what I’d like it to, so I’ll be looking for other solutions.

For the context, here is my playSound function in SDL, which I’d like to mimic in Pokitto. It works with a single circular buffer that is being played constantly over and over and the playSound function simply adds the SFX to the values in the buffer. The only limitation is that the SFX can’t be longer than the buffer size.

Well, if the circular buffer thing is not important, but you just want to play samples and three simultaneous sounds is enough, then there are the OSC functions.

To play sample on osc1:

Sorry if this seems impertinent, but why are there bytes there?
Are those supposed to be std::byte or Arduino’s weird byte alias for uint8_t?