I am an beginner from Germany, loving all small electronics, without getting too much into programming… Maybe a bit too stupid or just maybe too much work and too less free time…

Loving computers, video games and everything that’s not smelling like closed system, even when I have had practically all available gaming consoles since the 1990’s. All good and cool but I think that there is no better platform like one which lives by and for the community.

From dingoo to gpx wiz, arduboy (arduboy is atm the only open source gadget I own, but I got my pokitto today and I am afraid that my arduboy gets back in its box now… Only thing that keeps me not doing that is the fact that I love arduventure. (BTW… Any way to get arduventure on my pokitto?

At this moment I am checking the games disk and looking into available bins for the Pokitto.

I really love this little guy… Can’t describe how much I like it… Many thanks to Jonne and all people that made this happen!

Is there any way to get old school ports like wolf 3d, arduventure running on my pokitto?

It would be so great…

Below is my first picture 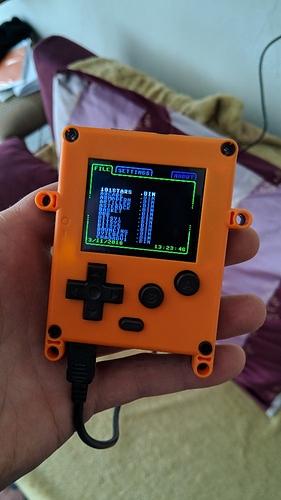 Hello from Czech, and welcome

It wouldn’t be too hard to port, I’d even try to do it, but there is one problem about it – the assets aren’t released under a free license, so legally we shouldn’t be doing it. I once tried to fix this issue by creating free assets and a new game based on the engine, but haven’t yet finished it. If you feel like it, you can try to move the project further, I released all my work as free.

Is there any way to get old school ports like wolf 3d, arduventure running on my pokitto?

@jonne made a small wolf3d demo on Pokitto, but I think it’s not uploaded anywhere right now. He might be able to provide it.

Also a shameless self-advertisement – I’ve been working on an advanced raycasting engine and demos for Pokitto – it’s not released yet, but it’s available if you really want to play around with it. Take a look here (there are gifs, and bins you can try out):

Loving computers, video games and everything that’s not smelling like closed system

If you’re more into electronics and HW than programming, that’s totally fine, and you’re find a lot of topics to discuss here. For example

Hat Ideas In response to the recent post about the joystick hat, here’s a collection of hat ideas. Idea 1: Trelemar’s button extension hat Trelemar’s idea of a controller extension hat, from this thread. [TrelemarHat] This was probably inspired by the Circle Pad Pro for the original 3DS: [3DS on dock] [Dock only] (I’d suggest maybe scrapping the speaker though, the Pokitto already has a decent speaker.) This is similar to the joystick hat, so it might be redundant now? Idea 2: Gyro Hat …

Thanks for the Infos

Going to look into your stuff. I have much to learn, to see and enjoy. Thanks for the warm welcome. Maybe some day we will get arduventure and such… Time will tell

yeah, was dingux, back in the days… the original frontend was buggy and i didnt like it, but its years ago, my dingoo broke a long time ago

thats a shame, mine is still running but the battery is slowly dying…

Yeah, wont be much of a problem to replace. its a very standard battery

But where to find the time!