Hello from a very small town in germany

Hello Pokitto Community,
as Pharap invited me, i want to introduce myself:
As the headline suggests i come from germany and just ordered my pokitto.
I am no game designer, i only did learn some turbo pascal some decades ago.
I collect games and gaming devices since 1978.
I especially love small independent games, pixelart and handheld gaming. I also collected some tamagotchis, since we have a great fan community here in germany. Sometimes i review game related stuff on youtube, but only for fun. I also own two arduboy consoles and a gamebuino meta is on it‘s way. I am happy to join this community.

I would say ‘Welcome Aboard’ but you were here first. I wonder how many other people on here own Arduboys? I certainly own one (or four).

@Rakkachi
So, where do you come from exactly, if i am allowed to ask?

im from the Netherlands, but i live about 3 km away from the german border. (Lobith)

That’s about 160 kilometers from my home, looks pretty nice😊

I can see why you say Germany … you are almost surrounded by German land. This looks like a parcel of land the Dutch annexed off Germany at the end of the last war. 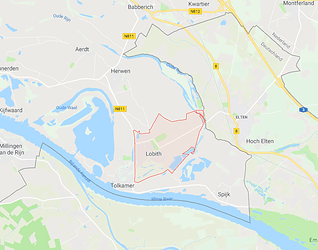 That is actually what happend to Elten (D), that was known as the Elterner butternacht. They could import butter without taxes because Elten changed from Dutch to German.

Unfortunately the netherlands tried to stay neutral the whole WWII, but germany did attack them nevertheless. After the war only very small parts from germany came to the netherlands (e.g. Selfkant, not for long). I had relatives who left germany, hoping to be safe in the netherlands…
I am glad that today these two nations live together without problems, but there sre way more people in the netherlands speaking german than germans learning dutch. I think we should have dutch in schools like english. I love the netherlands.

I used to live in Delft. Spoke dutch even (age 4). Alas, I have forgotten it.