Scopa is a favorite game of Italians. Scopa, in Italian, means broom. In the game of Scopa, you are awarded points in a variety of ways, but one of the best methods is to sweep the board. This is known as a Scopa !

A Scopa Deck has 4 suits. (Coins, Swords, Batons / Clubs, Cups) within each Italian suit there is the 1-7, Fante (an infantry man worth 8), Cavallo (calvary man worth 9) and the King (worth 10). These values are important for making Scopa tricks.

Players draw a card to see who plays first. Once decided, each player is dealt three cards and four cards are dealt, face-up onto the table.

These cards are now out of play until scores are calculated at the end of the round.

As you will see in the scoring section below, you are rewarded for capturing the coin cards, the sevens and the prized seven of coins (or Sette Bello). You are also rewarded a point for clearing all cards from the table - this is known as a Scopa.

After the dealer has played the final card of the final hand of the round, the player who most recently took a trick is awarded any remaining cards on the table. After the last card of the round has been played, points are calculated for each. If no one has won the game, the players swap positions and a new set of cards are dealt and play continues as described above.

You cannot simply discard a card that has the ability to take a trick. If, for example, a 2 and 4 are on the table, and a player holds a 6, the player must either take that trick, or play a different card from his hand.

Points are awarded at the completion of each deal. Players get one point for each “Scopa”.

In addition, there are up to four points available for the following, each worth 1 point apiece:

The “prime” for each player is determined by selecting the player’s “best” card in each of the four suits, and totaling those four cards’ point values. When calculating the prime, a separate point scale is used. The player with the highest number of points using this separate point scale gets one point toward the game score.

The game is played until one player has at least 11 points and has a greater total than any other player. It is important to note that no points, including scopa points, are awarded mid-round; they are all calculated upon completion of the round. For that reason, if the current score is 10 to 9, and the team with 10 points captures the seven of coins or a scopa, the team cannot immediately claim victory. It is still possible that the opposing team could end up with a tied or higher score once all points are calculated.

This game consists of a POP file and supporting sound assets packaged in a .zip file. Please expand the contents into a directory on you computer - you will see a POP file and a sub-directory called music. Please ensure both the .POP file and folder are copied to the root directory of your SD card.

Depending on what other games are installed on your Pokitto, you may already have a sub-directory called /music on your machine. If prompted, simply merge the contents of the Scopa directory with the folder already on your machine. The names of the file are unique and should not clash! 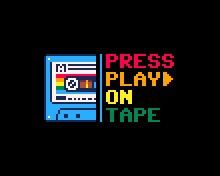 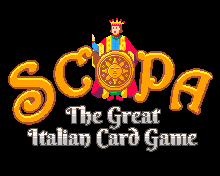 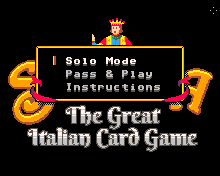 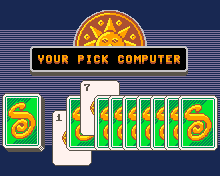 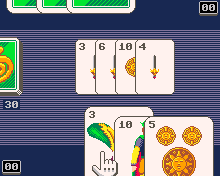 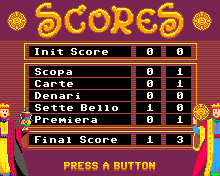 Thanks @hanski. Its @Vampirics’s work!

Not sure if you have played Scopa before but its a deceptively simple game to learn.

Beautiful graphics. I hope to have some time to play this today

I hope you have a decent SD card … most of the graphics are streamed from SD and a cheap card can give average results.

Ok, never played before - perfect time to change this

After the inital confusion I started to play Scopa. The rules remind a normal card game, “Casino”, IIRC.

I had not heard of the card game casino but it does share some similar rules.

What was your initial confusion?

Out of curiosity, how does it perform on you Pokitto / SD card combination? Some SD cards do not perform that well.

What was your initial confusion?

Just the normal hassle when getting familiar to rules. The same applies to playing real card games etc.

Out of curiosity, how does it perform on you Pokitto / SD card combination? Some SD cards do not perform that well.

The only place I noticed slowness was in the initial raffle about who will start. The “hand” moves a bit slow horizontally over the crads.

It took me a minute to realize the controls, because I am not a smart man and skipped reading the instructions

but this is a lot of fun! And yes, the animations and graphics look incredible! And they work alright with my SD card Pokitto combo (the SD card that came with the unit)

Excellent. You will be glad to know that the instructions just tell you how to play the game - not what controls to use!

The game is a 10/10 in all aspects. I’m used to the game rules so it was an instant jump in a typical Italian Osteria to play with some old friends.
The cards animations and the lovely graphics ares an eye candy.

From a tech point of view I’d like to know how the cards are rendered. Seems like the images are packed inside a file in “/music/SCOP_CDS.img” . How that file was created?

I have a NodeJS routine that I adapted that turns a PNG into a binary stream:

It creates one big file.

Then in my code, I just position to the start of the image and read it into a buffer I have predefined:

Or the screen buffer directly:

Thanks for clarification of the missing piece of puzzle. That scripts looks familiar

.
Are the original cards images available?

The script should look familiar

After all it came from you!

They could be but I better check with @Vampirics … what are you thinking of using them for?

Actually nothing really planned. Just the cards are so nice that they worth at last another couple of games

Having Briscola in mind? Anyway you know that i cant say no to you, just mention who made them, thats all.

I have added you to the repo, @HomineLudens … do I need to learn how to play Briscola?