This could make an interesting Pokitto game. The scrolling screen makes it ideal for the small screen of Pokitto. That does look cool, reminds me of one I had on the 360 called miner dig deeper that is long since gone.

That would be a great game to remake. I had totally forgotten this one but remember playing BITD.

Did you play it on Atari, c64 or something else? I had C64 but never played this.

Looking at the wikipedia. It mentions only Atari, c64 and Apple II versions exists.

Interesting - did not play this game before

Well I had an Apple II as well … not sure whether it was on the Apple of C64 now.

The way the colours are layered reminds me of DigDug. 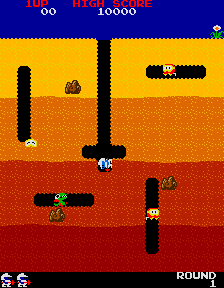 Probably becuase it was an arcade cabinet, so it could afford to have custom rendering hardware.
(The lesser-known Atari 2600 version of DigDug looks worse.)

Apparently DigDug is earlier by one year (1982), which leads me to suspect the similarity isn’t a coincidence.

The water brings an interesting twist to the game. DigDug is a good game but too familiar to the most people