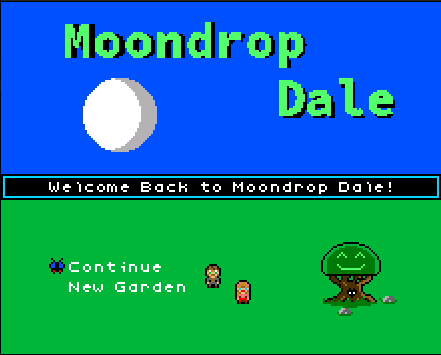 A tattered, beat up, little garden house has been left to you by an unknown donor that had recently passed away. Your goal is to tidy up the property and revive the once flourishing garden to its proper glory, and earn some easy money in a wealthy town.

I was trying the game. The music is beautiful! Makes to atmosphere very calm and nice. At first I did not know what to do. The in-game help (when the day changes) is a very good idea. You could put much more info there. Also you could tell what the icons are. Much like now there is a “!”-mark when the operation is denied, there could be a bubble which tells the tool name. I was able to grow some white things, and got some money

not sure why I didn’t heh…

The gfx is very small. It is hard see sometimes, but that is probably due my bad sight.

They are definitely tiny. I started out originally with almost 2.5x the size, but to fit all the content I had to really shrink things down. I’m sorry that they are so small that it is a negative

no crashes or anything

Thank you! I was weirdly proud of that one! haha

The in-game help (when the day changes) is a very good idea. You could put much more info there. Also you could tell what the icons are. Much like now there is a “!”-mark when the operation is denied, there could be a bubble which tells the tool name

I’ll add this to my list of enhancements to make

I didn’t realize (as usual hah) that the complexity would require some more helpful explanations. Though this is a common feedback from almost everyone so obviously I’ll have to think of something

Thank you so much for playing and giving such helpful feedback! Means a great deal to me

You really managed to pack a lot of features into the game for the jam! I would say that for a game like this, you really need a lot of things to do so it doesn’t get too repetitive, but you did manage to put a good amount of variety in for the time you had. I do hope that even more things can be added in the future, though.

I think the one-screen restriction is interesting, but also a bit limiting. However, limits encourage creativity, and I think that this can definitely go a lot further with the idea of limiting everything to one screen. On the other hand, allowing the game to expand beyond one screen could give a whole town to explore, which would also be interesting.

I like the “do once a day” task of talking to the tree, and more tasks like that could be interesting, especially if you couldn’t do all of them in the same day, or if certain days had special events. The fishing can get kind of repetitive, and I think it would be nice if more depth was added to it. Also, it would be nice to have better fishing rods that would reduce the amount of garbage I was catching. It seems like there’s so much garbage in the water that the farm must be downstream of a factory or something!

I played all the way until I harvested a magic fruit. The gap in price between the blueberries and the magic seeds is large enough that I felt like I spent most of the game just trying to save up for magic fruit. I think that with more item upgrades and things to do, the grind to get to that final purchase would not feel quite as long. I would love an upgrade to the watering can for greater capacity.

It was sometimes hard to tell for some plants whether they were ready to harvest. Maybe a sparking animation could be used to more clearly indicate plants that are ripe?

Thank you so much for the review and feedback! I think given what I’ve been planning for post-release upgrades, you will be happy to know that most of the things you’ve suggested are 100% spot on the radar

This is simply amazing @torbuntu. Excellent job on it so far, and I can’t wait to see where you go with it.

Well done, the small details as the short intro story, give the right mood to relaxing gameplay.
You really fit a lot of stuff in this one.

It is definitely a more focused genre

what sort of things would you have liked to see? I am planning to push this one much further post-jam!

what sort of things would you have liked to see

I’d love to see more of the story background… who lived here before “Tor” and “Lol” ? Did he/she left some kind of treasure under they garden? Are other people leaving near this piece of field? Do I have some neighbors?

thanks for the feedback! Story will definitely help to push more purpose to the game