Choose between English or French dictionaries in this version of Wordle for the Pokitto.

What are the rules of LeWord?

You haven’t played Wordle, really? Its such a simple game you will work it out playing it but anyways: 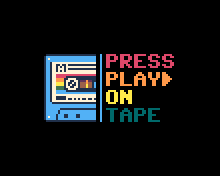 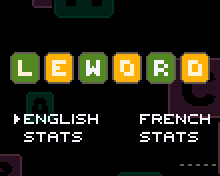 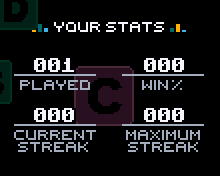 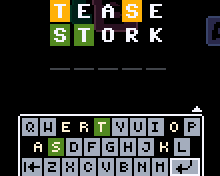 This game consists of a POP file and supporting sound assets packaged in a .zip file. Please expand the contents into a directory on you computer - you will see a POP file and a sub-directory called music. Please ensure both the .POP file and folder are copied to the root directory of your SD card.

Depending on what other games are installed on your Pokitto, you may already have a sub-directory called /music on your machine. If prompted, simply merge the contents of the LeWord directory with the folder already on your machine. The names of the file are unique and should not clash!

I love the aesthetics and the OSK looks so awesome!!

I have played Mastermind as a kid. That has a lot in common. We have played Wordle (Finnish version) few times with my wife.

So when you switch to French, does the title swap to “The Mot?”

i think this one was inevitable

Noticed there is a “DS.data” file and an “uncompressed” folder in the zip-file. Is the latter needed?

I will try the game soon

No they are not required … thanks for the heads up, I will remove them!

You are right … I am surprised I have never seen that.

As this game came from the Arduboy, I built a lookup table to point to the starting positions in the word list based on the first two letters of the word. There are no words starting with ‘QW’ so it returns a 0xFFFF. I am not bothering to test if that is the case and … well you found it!

Damn it probably does the same on the Arduboy version too!

Version 1.1 released to fix this!

“Qwert” still hangs for me.

LeWord looks for incorrect words where those words are like real words. Qwert is not even a close approximation for a real word

Pretty sure I have nailed it now! @Hanski would be grateful if you could test!