@gibs would it be better that there remains a crater on the place where the turret explodes?

Now that it “disappears” completely, it does not look as satisfying as it could

If the tilemap is in ram that could be a crater tile. No need to reserve an actual object for it any more.

This is looking so awesome and I can’t wait to play it. Always like a good schmup. Keep up the great work.

oh! I’ve been known to be a good pilot! glances at high score for other space shooter titles oh… not the best anymore, I forgot… heh @tuxinator2009

Here is a video of the full map on real hardware:

The progress here is incredible! This one is going to really tax my thumbs I can already feel it

Its easter monday !!
For easter you need a video with good quality sound, so I took the sound from the audio jack a did this video

Are you a striker ?

That is so next level

The super fast gun feels great! I did not know Pokitto could be this fast

Great job @gibs , its easily the best soundtrack for a game on the pokitto, and the sound quality is beyond everything else i ever heard on Pokitto.

About the musics, for everyone not having it working:

hmm, the bullet that hit the ship, is removed. you should not get a game over. or I misunderstood.

I noticed some towers would “explode” when you explode as well, regardless of their actual states. It’s only a GFX, no impact on the gameplay (alive turrets stay alive), which is kind of confusing

Only before the game over

When you explode and you still have life left, only enemies bullets are removed.
Thanks, for your comment and for communicating the correct music path. I was outside

Really cool! Also… really punishing! I feel like I’ll have to really memorize the level to get ahead of some of the turrets and especially the tanks that track. Here are my main two thoughts:

First to the key 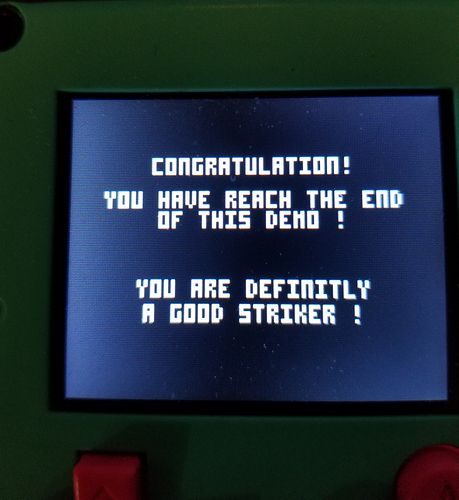 Really great so far. The music is a great addition to it.
My suggestions:

I really like how dying doesn’t reset your powerups, instead it only resets your firing rate. One of the hardest things to balance with these types of games is making it doable, though extremely difficult, without any powerups (at least without the ones you loose when dying), but not making it too easy if you do have the powerups.