Gameboy game I found at homebrew hub. I’ve already made a native 2048 game, but it’s nice to have a choice and be able to study a different implementation, so why not. Besides it only took me a few seconds to convert this with @FManga’s zboy emulator. a gameboy (and SMS) port of 2048. Contribute to Sanqui/2048-gb development by creating an account on GitHub.

one of the best game i ever play, thanks ! 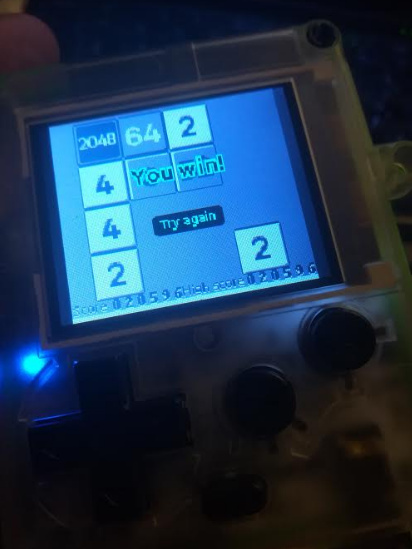 It is a good game. You will find here a lot more great games for Pokitto!
And welcome on board

Wow! I still haven’t even been able to beat any 2048 game, well done!
And welcome to the Pokitto community

I knew that smurf looked familiar.

Good to see someone else putting some work into the zboy. I noticed you replaced some functions with defines; did that help any?

Good to see someone else putting some work into the zboy. I noticed you replaced some functions with defines; did that help any?

yes a bit faster than initial code, maybe counterbalanced by the way i set dynamic palette & scaling, today i tried shunt all keypad code to made direct write keys to gb struct by interrupts, without success, seem interrupts are not launch at all, i need investigate

back to gp32 age (hello @ThunderZ !) i included the rlyeh port of gnuboy into my firmware, code is pretty clean and was run near full speed at 33mhz for some games, yet not know the ram usage but it may help

I’ve told friends last week that the community and the “GP32 age” miss me.
We were young and happy and the irc channel.
And we all made great great game, hack and emulator on this machine.
This time is missing.

rlyeh port was great and clean.
Did you try port it to pokitto allready ?
Pokitto have great hardware but miss some memory and fast direct acces to LCD but you could do nice think with good trick too cause the hard is the same for all (like old console time)
So all hardware trick work every where

that was golden era \o/ all was possible, and with only gba on other side we were focused and implicated on our platform, actually with the rise of microcontroler it’s a bit like the same eldorado

i greatly remember your cotton remake <3 work you done on emulators was awesome, we were young but you were already a mature dev ;- )

Did you try port it to pokitto allready ?

only got an second hand unit since few days, i need before anything investigate properly the hardware, particularly the st7775, to start porting my game engine onto the system,
few month ago i taken on a destocking a gamebuino meta, that’s the same system like here, except 4ko ram less and screen who’s a 7735 on spi, hard to fit into rom & ram but i started port an old project you may remember :- P

rlyeh port was great and clean.

work he done was just amazing, comparable to xport done aside on original xbox
i tried few years ago to contact and request him an “fday” source release, without success yet :- /
near all devs from the community are missing, all sites & irc are down, time past ^^

@r043v , welcome on board. The one thing Pokitto has going for it, is that this is not my main source of income. Pokitto ltd is free to do whatever we want. There have been many many gaming / enthusiast systems that have died because they can not support themselves financially. Pokitto may not be the most advanced device out there, but like the tortoise in the story of the tortoise and the hare, we will win by outlasting everyone else!

as your system is not dedicated to emulators, community seem pretty active and composed from many enthusiast devs, pleasant to see than you continually work on your api, generally from a software way initial state is near from final one, just no support & abandoned, here i see you are well implicated, that’s your baby, make for fun & not only for $. cost of the unit is great, on other hand gamebuino meta have leds (<3 <3 <3) but is overpriced a lot, his community got greats devs but seem now be clinically dead

surprising that having near same architecture they are few cross project !

surprising that having near same architecture they are few cross project !

It is because Pokitto is not an Arduino device. First it was a problem, but now we have a much better IDE (FemtoIDE) than Arduino thanks to @FManga

Edit: ah! Now I recognize you @r043v. I am very happy you have arrived, its great to have you here.

We will all help you to get to speed with our tools.

You could add LED’s to Pokitto

It is because Pokitto is not an Arduino device.

This is a major benefit in my mind

This is a major benefit in my mind

You could add LED’s to Pokitto

sure it can be done, but have eight of them directly integrated & mainlined is a pretty valuable add on for a pretty cheap price, giving out the channels mod replay into is just a magic thing <3

i was never seen an integration like this before, pretty surprising when i discover it, meta have some bad side but not this one \o/