So actual api is missing the abilities to draw image rotate/flipped? That’s would be useful for tile engine/maps!

There’s no reason it couldn’t be added, but it would come at a cost.
Either memory or speed.

Flipping is usually relatively cheap because it usually just means flipping the order that data is read in.

Rotating on the other hand is quite costly.

Arbitrary rotation is difficult though. 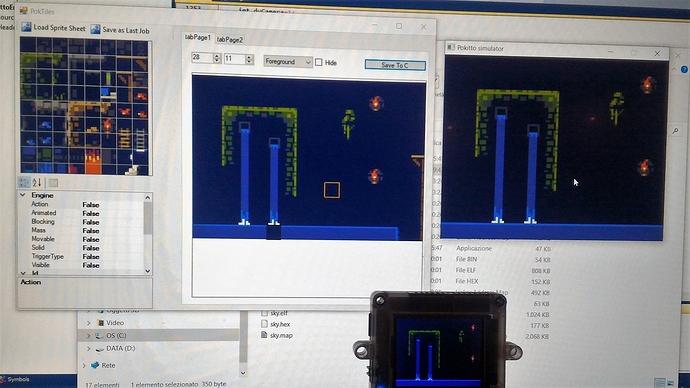 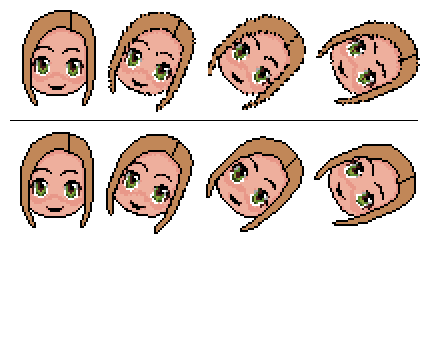 i think this would then give you smooth rotation: (if 90° is inplemented)

I’m interested only on 4(3) rotations 0°-90°-180°-270° and 2 kind of flip Vertical and Horizontal.
This kind of modification on image should be almost at zero cost on CPU. So I think at least. Also are the only kind of rotation/flip that works well also on low res sprite (8x8).
That means: 2 Bit for flip, and 2 Bit for rotation. Easy to store on memory.

Pokitto Inception:
From left: PokTiles(Tiles editor, can export to C header), Pokitto simulator, Pokitto Web (thanks @FManga) and Real Pokitto (With altered palette to make it more similar to my display) 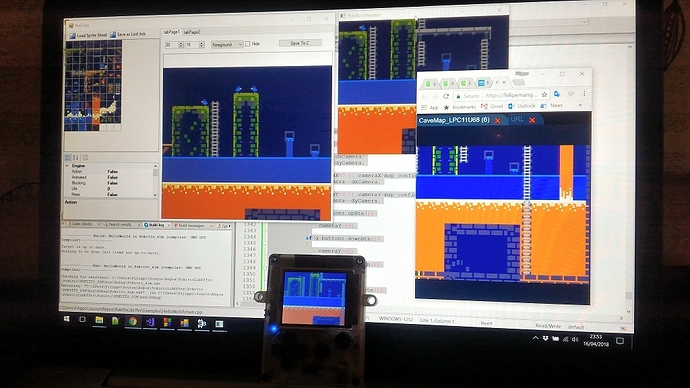 Hah, I hadn’t noticed how inaccurate my colors are!

Actually really not so bad. Maybe some photo artifact due to animation (scroll effect). Real pain is to match the HW Pokitto . It really depends on palette color choice, and the one in picture is simply too dark.

@Pharap can you split the post to another thread.
From here I suppose :

(Sorry about the out-of-order comment, I missed it on the first go.)

i mean you could be memory efficient with some sort of bit-flag to store both flip and rotation
drawBitmap(x, y, sprite], NO_FLIP | NO_ROTATE);
though you would lose a bit of ease of use (like the thing i showed before) and you need to unpack those bits as-well so im not sure if its worth it

So @jonne what’s your view of the api about flipping/rotating images?
Right now it seems only X flipping is implemented (with a glitch on the borders).

IF the bitmp drawing is going to be messed about with, how about having an optional flag to identify the bit depth of the bitmap, but default it to the current screen mode. That way, we could have 4bit images in 8bit mode etc.?

That is a good idea to save RAM. Maybe each bitmap could even have own 16-color subset (map) of the main 256-color palette. Otherwise the first 16 colors of the 256-color palette will always be used.

A good idea as long as its implementation makes it optional.
Otherwise people who don’t use it would be paying for a feature they aren’t using.