Today I’ve been assembling Pokittos. Didn’t quite make it to shipping but good news is I was hitting 3.5 minutes per Pokitto by the end of the day. This video was only batch #2 and speed and workflow improved after this. I just thought you’d like to see the process

We plan on shipping first big bunch next week wednesday.

Cool, no doubt it will take a little while to get through the early birds, but it’s really nice to see that everything is almost done!

I intended to ship some on friday but I have come to conclusion a trackable shipment is better for all parties. Individually trackable is expensive, but not in lots. Thats why going to ship as big lots of minimum 100pcs. Aiming for wednesday next week

Nice. Out of curiosity, will this first 100 be the first 100 early birds or is it random?

To be perfectly honest, first ten or so will go to people who have been very active on these forums. It is my way of thanking for the time and effort they have put into Pokitto so far.

After that it will go in order of backers. Earlybirds first.

Awesome! I was just about to ask if these have been sent out, yet. 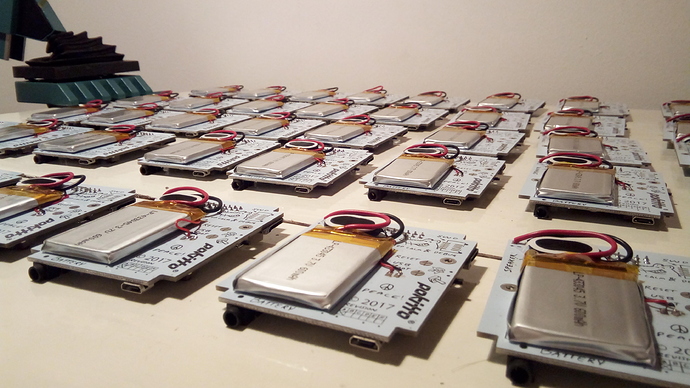 I bet the next 100 likes are from people hoping that they can see their Pokitto on that table!

Well, even working alone I make 10-15 per hour so should be able to hit that 100 pretty soon, tomorrow latest. Edit: that said, I will probably hire some help very soon. There’s no point in hiring anyone until you figure out the details yourself.

Yay! We can see the doodles now!

Also, my dad was the one who ordered my Pokitto…if I’m on the list for people getting their Pokitto because of the forums, just PM me and I’ll tell you all the details you need