I have a vectory of baseClass pointer that contains all the object instance in my game. Any instance is a derived clas of this base class. During an iteration I have to check the type so I try to cast the object with:

This compile in CodeBlocks but not in Embitz
I’ve found a workaround but it would be nice to investigate.

fno-rtti
Disable generation of information about every class with virtual functions for use by the C++ runtime type identification features (dynamic_cast' andtypeid’). If you don’t use those parts of the language, you can save some space by using this flag. Note that exception handling uses the same information, but it will generate it as needed. The `dynamic_cast’ operator can still be used for casts that do not require runtime type information, i.e. casts to void * or to unambiguous base classes.

The error 'dynamic_cast' not permitted with -fno-rtti means that you can’t use a dynamic_cast because the compiler has been told to not emit run-time type information (RTTI).

dynamic_cast requires RTTI because of the way it works - dynamic_cast checks that the type is correct at runtime before trying to cast, and returns a nullptr if the type cannot be cast.

To fix this you need to remove the -fno-rtti compiler flag, which like most compiler flags can be accessed from the project build options: 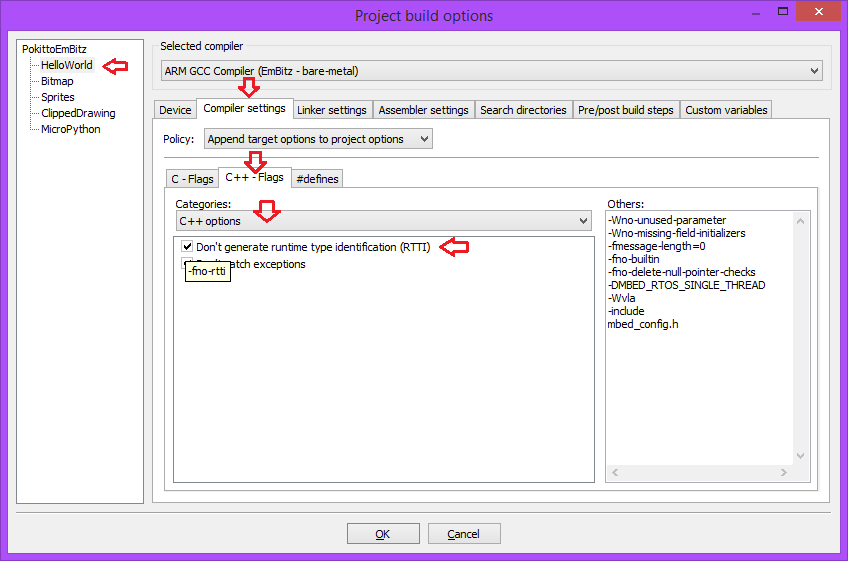 By the way, generally dynamic_cast is avoided in favour of making use of virtual functions. If you can think of a way to achieve what you want to do by overriding virtual functions then prefer that way because it doesn’t require RTTI and it’s generally considered to be more flexible. Sometimes dynamic_cast can’t be avoided, but usually there’s an alternative.

Btw, there’s a reason for no RTTI.

Edit: yes, this is a part of the background story of Pokitto 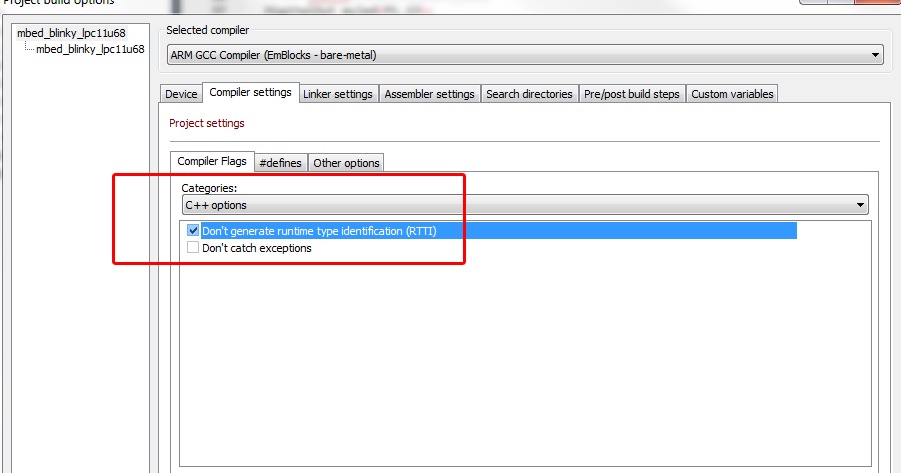 Importing mbed libraries to Em::Blocks - do not get caught by RTTI and...

Ok, so you got some project that you have taken from mbed online compiler and imported to Em::Blocks. It's compiling fine. And then you d...

By the way, generally dynamic_cast is avoided in favour of making use of virtual functions.

That’s how I fix it. Nice to know ho enable this on EmBitz, that’s quite buried in the deep indeed.

That’s how I fix it.

That’s good.
Switching to using virtual is actually a solution, not a workaround.
If anything, dynamic_cast is the workaround.

that’s quite buried in the deep indeed.

They’re ‘hidden away’ for two reasons.

Firstly because compiler flags are a somewhat advanced topic - understanding the flags requires knowledge of the language, the compilation process and the specific compiler being used.

And secondly because they usually only have to be edited once or twice, it’s probably not something you’d need to be accessing regularly.

That said, I would argue that they’re not entirely ‘buried’.
To someone who knows about compiler flags, the build options are actually the logical place to look.

Though I won’t argue that build options menus never look particularly nice. There’s so many options that it’s hard to make an interface that isn’t cluttered up with tabs, combo boxes and check boxes everywhere.

Btw, there’s a reason for no RTTI.

Huh, I was expecting it was because RTTI increases code size and comes with a performance code.

6 posts were split to a new topic: Alternatives To dynamic_cast