Since i already had a pixel moving around my screen i added a frame to it: 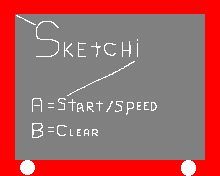 edit, updated using tips from Pharap. Added a gamecondition to display title, as in the Lost game.

I do would like to add a simple start screen, maybe a few lines of text stating the button use. What would the best way to do that ?

The cleanest way to do that simply without using a class system is (in my opinion) to use scoped enumerations (enum class and a switch statement).

I did a quick reshuffle of your code.
I made a few other changes, some cosmetic, some functionally important.
The cosmetic changes are mostly personal preference.
(I find allman brace style much easier to read than other brace styles, I genuinely struggle to read styles that put the opening brace on the end of the line.)

If you have any questions don’t hesitate to ask.
I didn’t actually check if this compiles or runs, so let me know if there’s an error or something doesn’t work.
(Generally it takes me more effort to check than it does to make the code changes.)

Thank you, i will have a good look this evening.

Just tried to compile it, got some errors.

GameState wasnt named the same everywhere so that was easy to fix.
Pokitto::Display.getWidth() is not allowed, so i changed it back to a fixed number.

And then there is this:

It seems that mbed doesnt support this C++ 11 feature “out of the box” ?

Racers.bin (45,7 KB) I hope it works, this time it is the right .bin. If anybody want´s to try it out please

I tried Embitz, but that has the same problem, even after setting it to C++11, i am going to try it like in the Lost game.

Sorry, I just realised that’s supposed to be Pokitto::Display::getWidth().

It seems that mbed doesnt support this C++ 11 feature “out of the box” ?

Ah dammit, I didn’t realise you were using mbed.
You’ll have to use regular enums if you’re using mbed because they’re behind the times and still haven’t got C++11 support sorted.
(We’ve had C++14 and C++17 since then, and it’s not long until C++20 arrives, so they’re really getting behind.)

Give me a moment to clean it up and test on EmBitz and I’ll get back to you.

Fixed. The only remaining issue was a typo.
(I put state instead of gameState).
I updated the original, but I’ll post it here too:

All these years and I still slip up on the little things like getting a variable name wrong :P.

If you can’t be bothered to get C++11 going, you should be able to replace enum class with enum and remove all the GameState::.
I’d recommend using C++11 on EmBitz though, C++11 was a major language upgrade.

I tried to set the 11 version in embitz, but this only accepted the enum class. The rest of the names were still in error (everything with :: in it)

Do i have to set/change more then the compiler settings?

I will add a picture of what i mean tonight currently on phone.

I tried to set the 11 version in embitz, but this only accepted the enum class. The rest of the names were still in error (everything with :: in it)

That’s definitely something else causing the problem.

I actually checked the code compiled on EmBitz.
I had to comment out the 3 lines related to Background.h because I didn’t have that file, but otherwise everything compiled.

@Rakkachi : the error must be in your project setup. I took the basic HelloWorld and replaced the main.cpp code with your code. Compiled without issues for me.

int main(void)
{
pokitto.begin();
// When 1 does not clear the screen, hence the pixel leaves a track
pokitto.display.persistence = 1;

// Move to gameplay when A is pressed
if (pokitto.buttons.repeat(BTN_A, 0))
{
gameState = GameState::Gameplay;
}
}

// Brackets are not needed with 1 line being executed when the if is true
if (pokitto.buttons.repeat(BTN_B, 0))
pokitto.display.clear();
}

void drawGameplay(void)
{
// Background first, everything else is drawn on top of that
//pokitto.display.drawBitmap(0, 0, Etch);
pokitto.display.setColor(2);

ok, i will check my settings tonight. Is the setup as described on the forum still accurate?.

* Which is the same as what I posted before, but with all the parts that need to be commented out, commented out.

Or, if you’re feeling brave:

I made the new setup in Embitz, i can compile and run all examples and the simple Noughts and crossed from Pharap.

The code as Jonne put it up here does compile, no problem. But the game doesnt work as it should.
I suspect because of the lines that where commented out.

So i will run trough it and see what i can learn and fix it.
So please no hints this time

i want to understand the code as it is now.

Many thanks for the assist @Pharap and @jonne

I made the new setup in Embitz, i can compile and run all examples and the simple Noughts and crossed from Pharap.

Glad to hear that. That means my tutorial was nice and clear (hopefully).

I suspect because of the lines that where commented out.

Yeah, you never supplied your Background.h file.
As a result we needed to comment out references to stuff declared in Background.h to get the code to compile without that file.

If it compiled without Background.h then it should compile with Background.h added back in.
If C++11 wasn’t turned on you’d have got errors about the enum class.

So please no hints this time

i want to understand the code as it is now.

Ok, no hints unless you ask, but I will say that if you get stuck, look to en.cppreference.com/w/cpp, or perhaps something from my cpp resource list.

I went trought the code @Pharap and I understand what is going on.

Did raise some points tho:

Why is this named twice ?

enum classes are ‘scoped enumerations’.
The values are scoped to the specific enum.

Using ‘unscoped enumerations’ (commonly called ‘plain enums’), this would be an error:

But by making them scoped enumerations:

There is a updateTitle and a DrawTitle, do I understand correctly that I could make something move in the Title screen?

Yes, you could make stuff move to animate the title screen.
Or you could have an options menu or something.

If you’re wondering why I split it, generally it’s best to keep updating the logic separate from the rendering.
If you split them up then it’s harder for bugs from one to bleed into the other and it’s easier to predict the state when you come to draw if you’ve handled all the updating before the drawing.

Why the extra check if the Step == 1 ? this seems redundant.

Not sure I understand. If you mean here:

Why write this positionX +=step; instead of positionX = positionX + step; ? I am aware of this normally being used but i cant find a good reason to do so.

Mainly because it’s shorter, partly because most people find it more readable.

Compound operators are much more common than the longer approach.
Technically it’s possible to make them not the same when defining custom types (though it’s unlikely anyone ever would).

You can stick to the long way if you want, but you’d do well to get used to the compound assignment operators, they’re used quite a lot.

If you think GameState gameState = GameState::TitleScreen; is repetative, you can write: