Brilliant use of technology 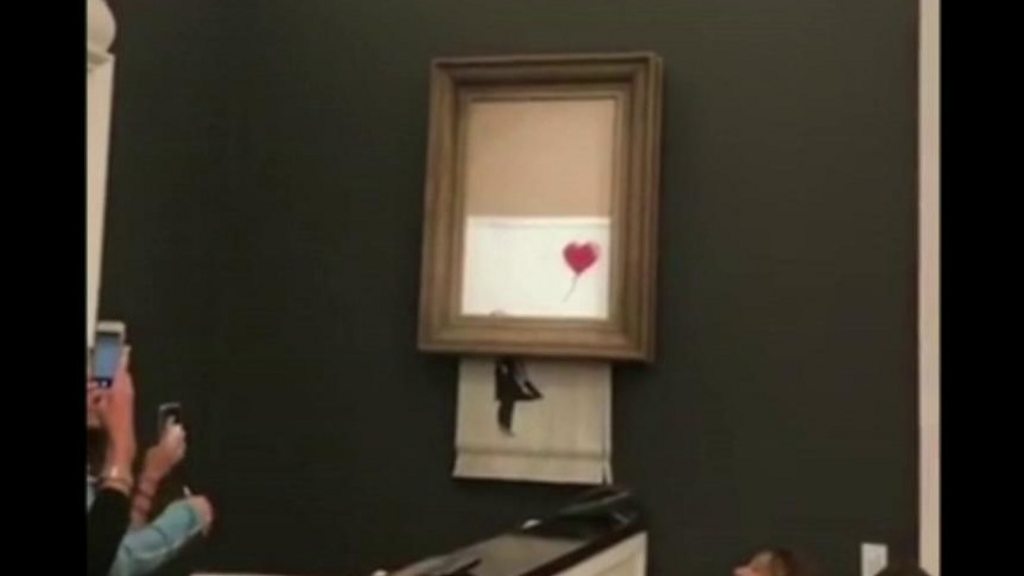 The artist wrote on social media that "the urge to destroy is also a creative urge".

Why not?
I think he’s brilliant!

I think Banksy’s been overhyped yes but thats not his fault, unlike Damien Hirst, who is just a glorified art salesman

This piece, that shredded yesterday, was made in 2006

So Banksy waited 12 years to spring the trap. I think that shows something.

Also, if you manage to put a slab of concrete on wall of the the British Museum with a depiction of a caveman pushing a trolley… and it takes 3 days for them to find out… takes some guts.

I actually wondered if it was sound activated…by the gavel…did they not wonder what the slot was for at the bottom for all of those years?

Made me laugh, and somewhere he / she is laughing too

Made me laugh, and somewhere he / she is laughing too

Most likely was at the auction with a remote.

Why not?
I think he’s brilliant!

Because he does graffiti on property he doesn’t own without permission, which is illegal.

Any normal person who does that would be looked down upon and arrested if caught,
but because he’s famous it’s suddenly one rule for Banksy and another rule for everyone else.
People who would otherwise condemn graffitists as vandals suddenly say “ooh, isn’t he wonderful?”.

I’m not a big fan of graffitists to begin with.
Graffitists are one of the reasons why where I live looks so run-down.
(I dare not think how much council funding gets wasted trying to combat it.)

Some graffiti I think can look good.
(There’s one particularly nice piece where I live, but I sadly couldn’t show it without potentially giving away where I live).

But whether I like the art or not, I’d much rather it were done on a canvas,
or uoon agreement with the property owner,
as opposed to being done on public property or on property where the owner has not agreed to it.
It’s better for both parties when people ask permission.

In the case of Banksy in particular, I’m usually not a fan of his style or his subject matter in most cases,
but in spite of that I’d have a bit more respect for him if he actually got permission from the property owner.
It would set a much better example for people who want to follow suit.
At the moment he’s just encoraging people to break the law.

I’m also never a fan of when celebrities use their power/status to try to influence who people vote for (i.e. the 2017 ballot incident).

So Banksy waited 12 years to spring the trap. I think that shows something.

Perhaps, but if Sotheby’s weren’t in on it then he’s just caused them a lot of problems.

After reading some of his stuff, I agree that I don’t like him for various reasons.

Ironically he was one of the artists who contributed to Banksy’s ‘Dismaland’ event,
and he comes from the same city that Banksy supposedly comes from.

I had to look Hirst up because I don’t keep an eye on the art world.
I find that a lot of the time I can find better art on Deviant Art than in galleries.

There are thousands of every day people capable of creating masterpieces that go practically unnoticed.
I’d much rather spend my time and money supporting those people.

I think when someone can stick an unmade bed in a gallery, call it art and sell it for thousands (£150k),
people should stop and question what’s going on.

That’s just my opinion though. People are free to think otherwise.

I have to agree with @Pharap Im not fond of it (banksy) and rate his work about the same as the dude who put a dog in a gallery and let it starve to death.

Thankfully Banksy’s not quite that bad.

The worst he’s ever done is had an elephant painted the same colour as the room it was in.
(Which he did actually get permission to do apparently.)

Even then some people complained about it so they stopped doing it,
which hopefully indicates that something like that dog incident couldn’t happen in Britain.
(We are (allegedly) a nation of animal lovers.)

I had a quick look and it seems there are conflicting reports of what actually happened to the dog,
so I really hope the reports about the dog being starved are wrong.

I know what you mean though - both are publicity stunts done at someone else’s expense.